Michelle Forbes was born in Austin, Texas, on January, 1967. After her primary education in Austin, she and her sister started out as dancers, but Michelle's heart was not in dancing. She was more interested in acting because her mother was working in the theater, and Michelle said that watching her mother perform opened her eyes, and she began to learn acting at the Performing Arts High School in Houston, Texas. From that start, she began acting in the theater, and was only sixteen when she went to New York on vacation for a couple of weeks, but ended up auditioning for a film. She then signed on with the famous William Morris Agency and moved to New York.

Her first major acting role was in the soap opera, Guiding Light, when at the age of only 20, she acted in a dual role of twins Solita and Sonni Carrera, who married Josh Lewis. She acted in the role from 1987 to mid 1989, earned a Daytime Emmy nomination, but left the show to pursue guest starring roles in several prime-time shows, such as Shannen's Deal, Father Dowling's Mysteries, and Half A Life. She joined the Sci-Fi series Star Trek: The Next Generation as Ensign Ro in 1992 and acted in the role until she left the role in 1994. She had decided she was tired of acting in a TV series, and though it was expected that she would take her role to Babylon: Deep Space Nine, she declined to continue in the role.

Michelle began acting in motion pictures with a small role in The Playboys in 1992, then appeared in the film Kalifornia and Love Bites in 1993, The Road Killers and Swimming With Sharks in 1994, Escape from L.A. in 1996. Michelle is a tall dark haired beauty, who can perform well as a frontier woman in Johnson County War, an FBI agent in the classic New Outer Limits Emmy award winning episode 'A Stitch in Time' with Amanda Plummer, a District Attorney in The Prosecutors, a President's assistant in the second year of the TV series 24, or any number of TV or motion picture roles.

Michelle has acted on stage in the Los Angeles Met in Call it Clover. She contiues to star in guest parts on TV series and films such as Dandelion in 2003, and her recurring role in the British TV sequel Messiah 2: Vengeance is Mine. 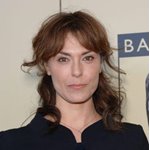 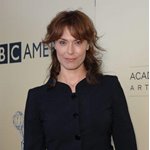