Marisa Berenson was born to an aristocratic family: her grandfather was art historian/collector Bernard Berenson, her maternal grandmother was fashion designer Elsa Schiafarelli, her father was a Boston-based diplomat, and her stepmother was Marchessa Cicciapouti di Guilliano.

Reportedly, Marisa made her on-camera debut in the 1961 film Some Like It Cool. She is better known for her later career as a top-drawer fashion model, gracing the covers of all the best international fashion magazines. Hired by filmmaker Luchino Visconti for a major role in Death in Venice (1971), Berenson proved she could act, and that she was not merely a wealthy dilettante. She was quite good as Jewish bride Natalie Landauer in Cabaret (1972), Lady Lyndon in Stanley Kubrick's Barry Lyndon (1975), and, her lovely hair buzz-cut to the bone, as a cynical death-camp inmate in the made-for-TV Playing for Time (1980). She curtailed her filmmaking activities in the 1990s. Marisa Berenson's younger sister Berry Berenson was the wife of actor Anthony Perkins. 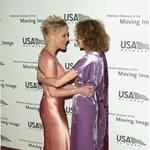