Born in Portland, Oregon, she grew up in on a farm in Ketchum, Idaho. But dad was Jack Hemingway, son of the Nobel prize winning author Ernest Hemingway and, with that heritage, fame was almost foreordained. By the time she was 21, after the lead in the rape melodrama Lipstick (1976), she had a budding movie career, a $1 million promotional contract with Faberge perfume, and her face on magazine covers around the world. But, within the decade, it was all lost. Her sister Mariel Hemingway, whose role in Lipstick (1976) had been suggested by Margaux, was a much greater success; she had started drinking heavily; two marriages had failed. In 1988, she checked herself into the Betty Ford Center for rehabilitation. Attempts to parley her recovery from alcohol into a revived career failed and, by the time she was 41, almost nothing was left. She lived alone in a studio apartment, no children, no lover, few friends. Neighbors informed police that she had not been seen for days and, on July 1, they entered through a 2nd floor window. Dental records had to be used to confirm her identity.The surname alone connoted fortune, wealth and creativity, but Portland-born Margaux Hemingway worked hard throughout her career to carve her own niche in the Hemingway saga. Raised in Ketchum, Idaho, Margaux worked various jobs in the Sun Valley area before traveling to New York City in the mid 1970's. With her striking beauty, she quickly made a name for herself as a model. She was the first model to be paid one million US Dollars to front a cosmetics line and appear on dozens of fashion magazine covers. Her work for the Faberge fragrance 'Babe' led to nationwide recognition, so it was no surprise that Hollywood came next.

In 1976, the rape melodrama Lipstick (1976) was released. Margaux had the starring role, and at her suggestion, her younger sister Mariel Hemingway was cast in a supporting role. Though the film had its merits, it found no favor among Hollywood critics, who were quick to slam her performance. Mariel, however, won praise and went on to appear in a number of high profile film projects in the late 70's and early 80's. In spite of her downfall, Margaux continued to work as a model and occasional actress, appearing in the low-budget horror Killer Fish (1979) opposite 'Lee Majors' and Karen Black. Margaux began attracting more attention from her turbulent social life, frequenting Studio 54 in New York and attending numerous glamorous parties and events. It was in this period that alcoholism began to come into play, a fact she later put down to her nervousness amongst the high profile celebrity crowd of New York.

In the 1980's she appeared in a couple of movies, most notably Over the Brooklyn Bridge (1984), a movie that she later mentioned as her favorite. Margaux spent much time traveling and spending time with her by now second husband Bernard Foucher. In 1984, Margaux was spending much time in Miami, Florida, and embarked upon the making of Hemingway: Winner Take Nothing (1998) (V) in Cuba. The documentary chronicled the work of her famous grandfather Ernest Hemingway, and involved her traveling around Europe and the USA. Her marriage to Foucher ended in the mid 1980's and the documentary hit the cutting room floor until its eventual release in 1998. Margaux next hit headlines by spending time at the Betty Ford Clinic to deal with her alcohol problems. She had gained weight, her career had dried up, and her second, childless marriage was over.

In 1988, Margaux emerged from the clinic with positive energy. She sold her tale to People Magazine and began to work on her film career again. The French movie Messe en si mineur, La (1990) was filmed in 1989, with her in a leading role, and in mid 1990, she appeared in the pages of Playboy Magazine. This move certainly attracted attention, and it was not long before she joined erotic thriller bandwagon of the early 1990Fred Olen Ray cast her as 'the other women' in the video rental store hit Inner Sanctum (1991), a role that required nudity. She was overshadowed by Tanya Roberts revealing performance in the movie, and went to be cast in a series of small roles in Love Is Like That (1993) (Bad Love), Deadly Rivals (1993) and a lead in erotica aficionado Joe D'Amato 's Donna di una sera, La (1991). Margaux changed the spelling of her name to Margot to serve as an official reminder of her sobriety in 1993.

In 1994, Double Obsession (1994) was released. Filmed in Boulder, Colorado, Margaux had split lead credit with English actress Maryam d'Abo, and she reprized her role as Anna Rawlins alongside Michael Nouri, Sandahl Bergman and Tracy Brooks Swope in Inner Sanctum II (1994). In 1995 her film career was struggling, and she was dogged by rumors of depression, something that she divulged all too often on celebrity chat shows like 'Geraldo Rivera'. In Vicious Kiss (1995) Margaux played opposite feisty Monique Parent in a throwaway role that was unflattering to her image and career.

More rumors abounded when a trip to India was cut short in 1995, sparking a frenzy over her mental health as she recovered at the Hemingway family home in Idaho, and despite her excitement to be narrator and moderator for an Animal Planet documentary 'Wild Guide', she seemed to be struggling. In July 1996, Margaux was found dead in her new Santa Monica apartment. A friend had become concerned after not seeing her for a while. The death was ruled as suicide by overdose sometime later, a ruling that her popular actress sister disagreed with.

Margaux Hemingway proved to be another in an unfortunate line of Hollywood tragedies, in spite of trying so hard in her last few years to keep her career fueled. Her husky voice and trademark eyebrows will only be remembered positively in the fashion world, not by her days as a leading lady. Backroads to Vegas (1996) (TV), her final film, was released in 1999, and a scheduled biopic was shelved. Margaux had been an avid environmentalist and traveler, and that was the path her career was taking. Over a decade later, her memory has been laid to rest, but her high profile personal problems may serve as a bitter reminder as to how hard playing the fame game can be. 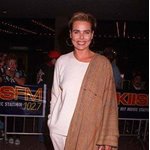