Luca Toni is a top striker in Europe. Toni’s nickname is “Il Bomber.” Luca Toni is a late bloomer at top-level football. Luca Toni is currently with German Bundesliga club Bayern Munich. He represents Italy at International level. He was part of Italy team, which won the 2006 FIFA world cup.

Luca Toni was born at Pavullo in Italy on 26th may 1977.Luca Toni started his football journey at lower tiers of Italian football. Toni joined Modena and represented Modena’s youth teams between 1990 and 1994.Toni started his professional football in Serie C1 with Modena, in 1994.He scored seven league goals for Modena before joining Serie B team Empoli in 1996.Toni joined Serie C1 team Fiorenzuola, in 1997. He joined another Serie C1 side Lodigiani, in 1998. Toni scored 15 goals for Lodigiani in 35 matches. He joined Serie B side Treviso in 1999 and he continued his goal scoring form with 15 goals. His performances caught the attention of Serie A side Vicenza and they signed him, in 2000.He scored nine goals during the season. Toni had the chance to play alongside Italian great Roberto Baggio after he joined Brescia in 2001.He scored 13 goals in Serie A that season. However, he failed to find form in 2002/2003 season.

Breakthrough in Toni’ career came after joining Serie B side Palermo in 2003.He scored 30 goals during that season, to help Palermo to obtain promotion to Serie A, for the first time in three decades. Palermo won the Serie B title and Toni was the top scorer in Serie B that season. In 2004/2005 season, Toni proved that he is good at top level by scoring 20 Serie A goals. He helped Palermo to qualify for UEFA cup for the first time in their history. Toni scored 50 league goals for Palermo in 80 matches.

In 2005, Fiorentina bought Toni for 10 million Euros. Luca Toni was inspirational in Fiorentina’s fourth placed finish in Serie A. He scored 31 goals in 38 Serie A matches for Fiorentina and he was first player to do score more than 30 in almost 5 decades. He won the European golden shoe for his goal-scoring feat. Toni holds the Florentina’s club record of scoring most number of goals in one top-flight season with 32 goals. He stayed on with Fiorentina despite they were convicted in caliciopoli scandal. Despite injury-plagued 2006/2007 season, he helped Fiorentina to clinch UEFA cup position with 16 league goals.

Toni started his International career with Italy in 2004 while playing against Finland. Toni scored a hat trick against Belarus in 2006.Toni played in 2006 world cup and he scored two goals .His goals were against Ukraine during the quarterfinal match. Italy won the world cup defeating France. Toni had a disappointing euro 2008 and he scored only one goal. Toni played in some 2010 World cup-qualifying matches. Toni has scored 16 goals for Italy in 47 matches. Toni is one of the most improved football team players in the world. 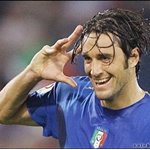