“I went to a performing arts high school, but I actually went for piano. When I had a falling-out with my piano teachers I needed something to do, so I took drama. I really liked it, so I said all right, I’ll do this for a while.” Lizzy Caplan.

Initially studying piano, Lizzy Caplan switched her interest into acting after having a falling-out with her piano teachers. During high school, she starred in such productions as “Much Ado about Nothing” and “You Can't Take It with You.”

In 1999, she began appearing on the small screen, playing the bit part of Sara (1999-2000) on NBC’s short-lived, but critically-acclaimed teen dramedy “Freaks and Geeks.” Lizzy recalled: “I was very much a guest on that show. It was the first thing I did and I was petrified every time I was on the show. But I’m so happy I was a part of it, because it was amazing.”

After “Freaks and Geeks,” Lizzy landed a guest appearance on the WB's (now CW) series about Superman as a teenager “Smallville,” playing "freak of the week" girl Tina Greer on the episode "X-Ray" (November 2001). In January 2003, she reprised her role on the episode "Visage." In between, Lizzy had a tiny part as a party girl in Jake Kasdan's teen comedy starring Colin Hanks and Jack Black, Orange County (2002), and starred as Faith Pitt on Fox’s short-lived sitcom “The Pitts” (2003). She also appeared on the talk show "The Sharon Osbourne Show" in May 2004.

Lizzy garnered much notice in 2004 when she was cast as a tomboy girl named after a lesbian singer and songwriter, Janis Ian, in the teen comedy Mean Girls, helmed by Mark Waters and written by (and co-starring) Saturday Night Live member Tina Fey. The film, based on the non-fiction book "Queen Bees and Wannabes" by Rosalind Wiseman, stars Lindsay Lohan, Amanda Seyfried, Lacey Chabert and Rachel McAdams as well as several Saturday Night Live cast members.

In the second season of Fox’s drama “Tru Calling,” Lizzy played Avery Bishop (2005-2006), a friend of Eliza Dushku's Tru Davies. She also landed a starring role on The WB’s one-hour dramedy “Related,” as the troubled sister Marjee Sorelli (2005-2006) who quit her job as a party planner to start a business with her boyfriend Jason (played by Julian Ovenden). Commenting on her role on the show, Lizzy explained: “She’s just fun. I almost never get to play the one who has the good clothes and lots of boyfriends and is crazy and wild.”

“Related” did not make it to The CW schedule and was canceled after one season. When asked if she keeps in touch with her "sisters" from “Related,” Lizzy replied: “I do, with all of them, actually. We kind of became sisters on that show, so now we're stuck with each other! Jennifer (Esposito) just came back to L.A., so she, Laura (Breckenridge) and I are all meeting Kiele (Sanchez) for dinner.”

Currently, TV viewers can catch Lizzy in CBS’ new sitcom “The Class,” which premiered on September 18, 2006. In the show, she starred as Kat Warbler, a photographer; and Lina's (played by Heather Goldenhersh) cynical twin sister. Being asked about her role, Lizzy said: “It’s cool to be in a role that’s interesting to me and still has that bite to it. Normally, the main girl part opposite the main guy is pretty boring. It’s the other characters that have the interesting things to say, the witty remarks.”

On the big screen, Lizzy recently co-starred with Leelee Sobieski and Daryl Hannah in Elliott Lester's teen suspenseful drama Love Is the Drug (2006). She also just completed her upcoming film with writer-director Gary Walkow, a small independent drama called Crashing, a sequel to a movie that won Sundance 20 years ago. She will share the screen with Campbell Scott, Izabella Miko, Alex Kingston and David Cross.

“One for the soul, one for the dough. Eventually I’ll probably want to do just films, but I’m so not at that point at all, and there’s so much to learn from just working on one thing for so long and with the same people. I think it will teach me endurance, and it’s great. I’m not done with TV yet at all.” Lizzy Caplan (about what she likes to do more between TV shows and films). 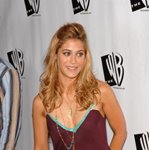