Nixon appeared in several small roles in telemovies and TV dramas in the mid 1990's, but became much better known after a short gig as the host of children's show "Plucka's Place" in 1998 led to a job as co‑host of the long-running prime-time variety program Hey Hey It's Saturday in 1998‑99. During 1998-2000 she also co-hosted a radio show on TT FM with Ed Phillips. Nixon also practices yoga and tai chi.

After the cancellation of the show in 1999, Nixon has had a number of presenting and reporting jobs on the Nine Network, including being a reporter on the Victorian edition of Postcards; a show about tourist destinations in Victoria, a reporter/sidekick on Micallef Tonight, a tonight show hosted by Shaun Micallef; the host of Bark-Off, a game-show for dogs; and most recently as the weather presenter for National Nine News Melbourne. In 2006 she was a presenter on Getaway for a short period, and also a co-host on Temptation, which is the re-incarnation of Sale of the Century. 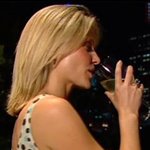