I was born on May 7th and grew up in a small town near Berkeley, California. From elementary through high school I was the shyest nerd you would ever find. I took art classes since I was very young, and always had a lot of pets. I won the school spelling bee in 6th grade.
In junior high, I was in the honor roll and played violin and then sax in band. I spent all my money on trendy clothes and accessories because I wanted to be popular. (Didn't happen.) I was nominated for "Best Hair" but didn't win.
In high school, I took more art classes and won some art awards. In my senior year of high school I was nominated "Most Talented" but didn't win. After graduation, I went to Diablo Valley College in Concord. I joined Asian Student Union and performed with their hip hop dance group. I took a Photoshop class, and played the drum set in a band. At San Jose State University I buzzed off my hair, got my leg tattoo, and pierced my nose. I started doing people's hair as a hobby. I won the dorm award for "Most Talented on 2nd Floor." (Redeemed! haha.) I got a bachelor's degree in Pictorial Art (drawing/painting) in December of '00. In October '01, I sent a few pictures to websites and started doing modeling shoots. I put my site together with the help of a book called "Teach Yourself HTML 4." I enrolled in beauty school in May '02 and got my cosmetology license a year later. In the summer of '03, I started doing photography as a side job. I modeled for a few magazines including Modified, Import Tuner, GameStar, three issues of Super Street and recurring photos in Kung Fu/Tai Chi Magazine. In Feb '05 I moved to LA and got my dragon tattoo. In '06 I appeared in two calendars: "Asian Angels" and "Car and Model". I started doing a lot of featured background acting, most recognizable in CSI NY, episode 2:13, and the feature film "Norbit" starring Eddie Murphy. Nowadays I do part-time photography, background acting, nightclub go-go dancing, hair and makeup, modeling, and web/graphic design. 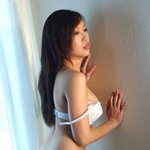 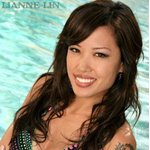 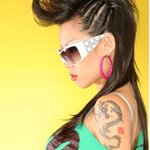 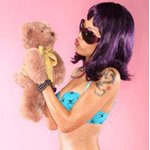