Actor, author. Born Issur Danielovitch on December 9, 1916, in Amsterdam, New York. Known for his distinctive voice, strapping physique, and cleft chin, Kirk Douglas was a popular leading man during the 1950s and 1960s. The son of Russian Jewish immigrants, he grew up poor. Douglas did odd jobs to pay for his college and support himself while pursuing his acting studies at the American Academy of Dramatic Art.


After serving in the U.S. Navy during World War II and having a brief career on the Broadway stage, Kirk Douglas made his first Hollywood film, The Strange Love of Martha Ivers (1946) with Barbara Stanwyck. Three years later, he gave a breakthrough performance in Champion (1949) as a boxer who stops at nothing to make it to the top. He amazed audiences and critics alike with his portrayal of Midge Kelly, which earned him his first Academy Award nomination.


A sought-after actor, Douglas worked with many leading directors, including Billy Wilder in 1951’s The Big Carnival. But it was his work with Vincente Minnelli that led two of his greatest performances: morally bankrupt movie executive Jonathan Shields in The Bad and the Beautiful (1952) and the troubled artist Vincent van Gogh in Lust for Life (1956). Douglas earned an Academy Award nomination for each of those films.


Along with his critical successes, Douglas was a big office box draw as well. Over the years, he often appeared with friend and fellow Hollywood heavyweight Burt Lancaster in such films as the western drama Gunfight at the O.K. Corral (1957), The Devil’s Disciple (1959), and Seven Days in May (1964). Working with director Stanley Kubrick, he also starred in the World War I drama Paths of Glory (1957) and in Spartacus (1960). His work in Spartacus as a Roman slave—and the film's title character—who leads an uprising is considered to be one of his signature roles.


In 1970s, Douglas tried his hand at directing with little success. Both of his directorial efforts—Scalawag (1973) and Posse (1975)—failed to make much of an impression on movie-goers. His acting career also stalled around this time. Some of his more memorable later films include The Man from Snowy River (1982) and Tough Guys (1986), which reunited him with Lancaster for the last time.


While one phrase of his life was slowing down, another was just beginning. In 1989, Douglas shared his life story in his best-selling autobiography, The Ragman’s Son. He has also showed a talent for fiction, including Dance with the Devil (1990) and The Gift (1992). One of his nonfiction works, Climbing the Mountain: My Search for Meaning (1997) was published shortly after Douglas experienced a nearly fatal stroke in 1995.


Not one to be daunted by personal setbacks, Douglas did not let his stroke slow him down for long. It did, however, affect his speech, but it did not stop him from acting. He starred in the 1999 comedy Diamonds with Dan Aykroyd, Lauren Bacall, and Jenny McCarthy. He also was nominated for an Emmy Award for a guest appearance on the inspirational television drama Touched by an Angel in 2000. More recently, he co-starred with son Michael Douglas in the 2003 drama It Runs in the Family. Douglas also continues to write—his latest work is Let’s Face It: 90 Years of Living, Loving, and Learning (2007). 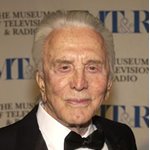