Kareem Abdul-Jabbar (born April 16, 1947 as Ferdinand Lewis Alcindor, Jr) is an American athlete and retired professional basketball player, widely considered one of the greatest NBA players of all time. During his 20 years in the NBA from 1969 to 1989, he scored 38,387 points – the highest total of any player in league history – in addition to winning a record six Most Valuable Player Awards. He was known for his "Skyhook" shot, which was famously difficult to block because it put his 7 ft-2 in body between the basket and the ball. Abdul-Jabbar's success began well before his professional career; in college, he played on three championship teams, and his high school team won 72 consecutive games. He has subsequently been named by ESPN as the greatest college basketball player of all time.

Abdul-Jabbar (Alcindor at the time) grew up in Harlem, New York City, the son of Cora Lillian, a department store price checker, and Ferdinand Lewis Alcindor, Sr., a police officer and jazz musician. College took him to Los Angeles, where he stayed for most of his career. In 1971, several years after converting to Islam, he changed his name to Kareem Abdul-Jabbar. Since retiring from basketball, he has been known as a successful coach, author and sometime actor. 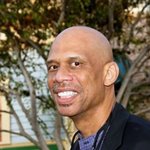 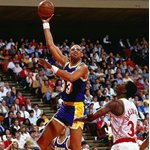 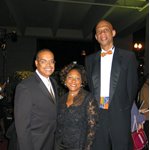 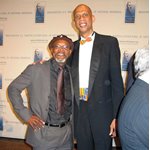