Ricardo Izecson dos Santos Leite (born April 22, 1982 in Brasília, Brazil), simply known as Kaká, is a Brazilian footballer who plays as a midfielder for Brazil and the Serie A club A.C. Milan. He is one of the budding young stars in world football.

Family
Kaká's younger brother Rodrigo Izecson Dos Santos Leite, known as Digão, followed in his brother's footsteps and is currently on loan with Serie B team Rimini, after having spent some time in the AC Milan youth squad.

Nickname
The nickname Kaká, from his native Portuguese, is pronounced as it is spelt. The accent would signify that the stress is on the second syllable. In Italian, the language of his current team, the phonetic equivalent is written as Kakà, which is used for Italian television graphics. However, the player's shirt name is spelt KAKA' (with an apostrophe, rather than an accented 'A') for both Brazil and Milan. An internet discussion forum explains the nickname as a commonly used shortened form of "Ricardo" in Portuguese. Kaká is supposed to have got his nickname because his little brother Rodrigo could not pronounce the word "Ricardo" when they were young. Rodrigo called his older brother "Caca\ Kaká suffered an accident when he made a faulty jump off a diving-board, resulting in a vertebra fracture. This could have meant the end of his football career, but he believes that Jesus allowed him to recover and become the successful footballer he is now. When AC Milan won the Serie A title in 2004, Ricky, as he is called by his team-mates, sported a shirt with an "I Belong to Jesus" slogan. He also points his fingers to the sky as a sign of thanks every time he scores, for apparently the same reason.

Marriage
Kaká married Caroline Celico on 23 December 2005 at the evangelical Reborn in Christ Church in Sao Paulo, Brazil, in a wedding attended by fellow players from his national team, as well as other well known international players. Guests included Ronaldo, Adriano, Cafu, Dida, Julio Baptista and Brazilian national coach Carlos Alberto Parreira. Caroline and Kaká first met in 2002, and started dating soon after. The relationship survived Kaká's move from Sao Paulo to Italy in 2003, while Caroline was still at school. It is likely that Caroline will stay in Brazil in the short-run, but the couple plan to live together in Italy very soon. 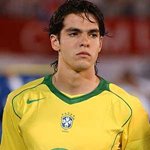