Slutskaya started skating at the age of four and has been coached by Zhanna Gromova since she was six. An only child, she is very close with her mother Natalya[1], who was a former cross-country skiier for the Soviet Union. In her career, Slutskaya has won a total of 40 gold medals, 21 silver medals, and 18 bronze medals.

In 1996, Slutskaya became the first Russian woman to win the European title. She also won the title in 1997. She finished third at the 1996 World Championships, and fourth in 1997.

At the 1998 Winter Olympics, she finished fifth in a very close free skate fight for the bronze. Maria Butyrskaya, Lu Chen, and Irina were 3rd, 4th, 5th respectively after the short program. Although these 3 skaters each made 1 mistake, Chen and Butyrskaya's were step outs while Irina had a fall. Lu Chen ended up edging Butyrksaya 5-4 for the bronze. Chen also edged Slutskaya 6-3.

The next month she took a silver medal at the 1998 World Championships. The 1998-99 season was not a good season for her. She did not win any competitions that season and missed both the European and the World Championships. She almost decided to stop skating and call it a career.

In August of 1999, Slutskaya married her on-and-off boyfriend of three years, Sergei Mikheev. They had met each other at a summer camp near Moscow, where Mikheev was a physical education instructor.

Slutskaya made a successful comeback at the 2000 Grand Prix Final. She landed seven clean triples, including two triple-triple combinations and became the first woman to do a triple lutz-triple loop combination. She later won her third European title and won a silver medal at the 2000 World Championships.

Slutskaya won silver at the 2002 Winter Olympics and became the second Russian ever to win a medal in the women's event. The competition had been billed in advance as a head-to-head battle between Slutskaya and American Michelle Kwan. Unexpectedly, Kwan made mistakes in her free skate, but still led American Sarah Hughes in the overall standings. Slutskaya had to win the free skate in order to win gold. After a nervous performance with a minor error, Slutskaya finished second in the free skate. She needed 5 judges to place her in 1st in order to win the free skate, but only 4 did. Hughes won the free skate, and because Kwan finished third behind Slutskaya, Hughes won the gold. Russia, still somewhat aggrieved about the outcome of an earlier dispute over the pairs competition, filed a complaint against the result but it was rejected shortly. The next month she won the World title in Nagano. Going into the freeskate, Slutskaya had an advantage. She had finished 1st in both the qualifying and short program. Fumie Suguri was 2nd, and Kwan was only in 3rd after a shaky short program. Slutskaya could lose to Kwan in the free skate (e.g. finish 2nd to Kwan) and still win. Regardless, she skated a strong performance and a majority of the judges named Slutskaya the winner of the free skate. This was her first world title.

Slutskaya chose not to compete at the 2003 World Championships after receiving news that her mother was seriously ill. Ironically after her mother got better, Slutskaya got an illness that included fatigue and swelling in the legs. Doctors told her that she should stay away from the cold, but she refused and finished 9th at the 2004 World Championships.

In 2005, Slutskaya made a strong comeback after a long stay at a hospital due to vasculitis. She won both the European and World titles. Being the first World Championships to be held under the new CoP system, Irina was the last to skate [1st after Short Program]. She made it her moment, as she skated a near-perfect program. Shedding tears while receiving her very high marks, the crowd chanted "Ira, Ira" (a diminutive from Irina), and she was overcome with emotion. In an interview, she said:

“ This is the question they ask: how could you get up after your fall last year? That's not right at all. You can't talk that way. When a person is ill, it's not a fall, it's a misfortune. And no one, unfortunately, is safe from that. I only want to say to those who don't believe in their [own capacity for] recovery: believe, fight...I got up — you can too. ”

To this day, she still recalls that the 2005 World Championships Free Skate was "the skate of her life." Although she has had perfect performances before, to her this was more special because "she was in front of her friends and family, and she was skating at home".

At the 2006 Winter Olympics in Turin, Italy, Slutskaya was one of the heavy favorites to win the gold medal. She was in second place after the short program, behind Sasha Cohen of the United States. In the long program, Slutskaya doubled a triple flip and then fell on a triple loop jump. She won the bronze medal, behind gold medalist Shizuka Arakawa of Japan and silver medalist Cohen.

Slutskaya did not compete in the 2006 World Figure Skating Championships the following month, and has not skated in competition since. In November 2006, she denied reports of her retiring from competitive figure skating, and announced she hasn't ruled out competing in the 2006/2007 season.[2] On April 10, 2007 Slutskaya announced she is returning to Russia from the United States and will not participate on the 2007 Champions on Ice tour after finding out she and her husband, Sergei, are expecting a child. [3] 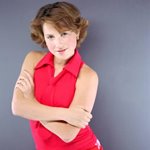 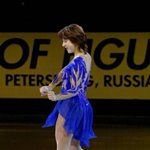 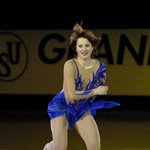 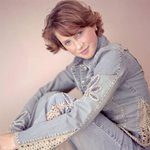 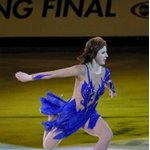 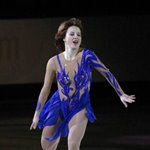 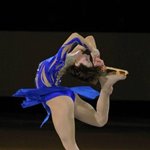 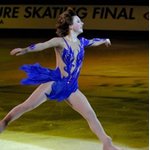