Henry Louis "Hank" Aaron (born February 5, 1934 in Mobile, Alabama), nicknamed "Hammer", "Hammerin' Hank”, or "Bad Henry”, is a retired American baseball player whose Major League Baseball (MLB) career spanned from 1954 through 1976. After playing with the Indianapolis Clowns of the Negro American League and in the minor leagues, Aaron started his Major League Baseball career in 1954. He played 21 seasons with the Milwaukee and Atlanta Braves in the National League, and his last two years (1975-1976) with the Milwaukee Brewers in the American League. Throughout his career, Aaron had many accomplishments and records. His most notable achievement was setting the MLB record for most career home runs with 755, which he held for 33 years until being surpassed by San Francisco Giants outfielder Barry Bonds on August 7, 2007.

During his professional career, Aaron performed at a consistently high level for an extended period of time. He hit 24 or more home runs every year from 1955 through 1973, and is the only player to hit 30 or more home runs in a season at least 15 times.[citation needed] He is one of only four players to have at least 17 seasons with 150 or more hits.[citation needed]. Aaron made the All-Star team every year from 1955 until 1975[1] and won three Rawlings Gold Glove Awards. In 1957 he won the National League Most Valuable Player Award, while that same year, the Milwaukee Braves won the World Series. It was Aaron's one World Series victory during his career as a player.

To honor Aaron's contributions to Major League Baseball, MLB created the Hank Aaron Award, an annual award given to the hitters voted the most effective in each respective league. He is the last Negro league baseball player to play in the major leagues.[2] He was inducted into the Baseball Hall of Fame in 1982, his first year of eligibility. 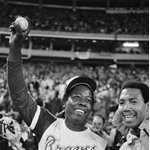 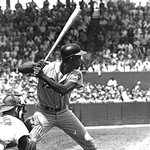 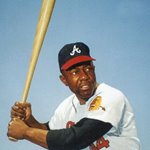 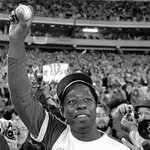 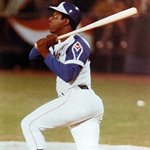 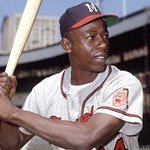 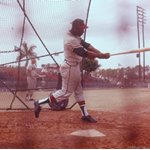