Named after actress Gloria Swanson, Hunniford was originally a singer. She was popular in her native Northern Ireland and worked in Canada, and has made many records. She returned to Northern Ireland as a BBC production assistant in Belfast, and a local radio broadcaster [1]. In the 1970s and 1980s she was the presenter of Good Evening Ulster and on network ITV Sunday Sunday and We Love TV.

Hunniford was the first woman to have her own daily radio show on BBC Radio 2, starting off with the lunchtime show before moving to the early afternoon slot in 1985 where she remained for 10 years. She also hosted Sounding Brass a phone-in request programme with a live brass band.

As a television presenter and celebrity, Hunniford has appeared on numerous programmes including Gloria Live, Wogan, Holiday, Songs of Praise, Kilroy and Sunday, Sunday and Open House with Gloria Hunniford. She has won many prestigious awards including TV Personality of the Year and Best Dressed Female, and has made a highly successful health and exercise video called Fit for Life. In 2005 she appeared on the BBC's pro-celebrity ballroom dancing show, Strictly Come Dancing, dancing with Darren Bennett.

She currently presents the Heaven & Earth with Gloria Hunniford religion and ethics show on BBC One from 2006. 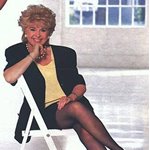