Thorogood's demo Better Than the Rest was recorded in 1974, and released it in 1979. In 1976 he recorded his debut album, the eponymous George Thorogood & The Destroyers with his band, The Destroyers (sometimes also known as The Delaware Destroyers or simply GT and D) and issued the album in 1977. Thorogood released his next album titled Move It On Over in 1978 with The Destroyers, which included the hit "Move It On Over". "Please Set A Date" and their remake of the Bo Diddley song "Who Do You Love" both followed in 1979. Before devoting himself exclusively to music, Thorogood played semi-pro baseball.In the late 1970s, Thorogood played on a team in Delaware in the Roberto Clemente League which was created in 1976. He was the second baseman and was chosen rookie of the year in the league. Soon after this achievement, The Destroyers forced him to quit playing the sport. In the 1970s, George and the band were based in Boston.

George and the Delaware Destroyers were friends with Jimmy Thackery and the Nighthawks. While touring in the 1970s, the Destroyers and the Nighthawks happened to be playing shows in Georgetown (DC) at venues across the street from each other. The Destroyers were engaged at The Cellar Door, the Nighthawks at Desperados. At midnight, by prior arrangement, while both bands played the same song ("Madison Blues") in the same key (E), George and Jimmy left their clubs, met in the middle of M street, exchanged guitar cables and went on to play with the opposing band.

George and the Destroyers are also notable for undertaking a rigorous touring schedule after appearing throughout the Rolling Stones tour in 1981. After two shows in Boulder, Colorado, George and his band flew to Hawaii and played for only one night. The next night they appeared in Alaska for one show. The following day the band flew to Washington State, met their roadies who had their Checker car and a truck, and continued a one show per state tour for all fifty states in exactly fifty nights. In addition, they played Washington, DC on the same day that they performed a show in Maryland.

During the 1980s and 1990s, Thorogood recorded some of his most well known works. "Bad to the Bone" was used frequently in television and the big screen. Several appearances include Terminator 2: Judgment Day, the comedy Problem Child, John Carpenter's Christine, and during many episodes of the television sitcom Married with Children. This track also was used during the intro to the movie "Major Payne". The same song is also featured in the game Rock 'n Roll Racing. It is also played during football pregame festivities at Mississippi State University. Quincy Jones once said to Thorogood, "The three things important in a record is the tune, tune, and the tune". 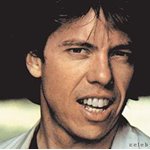 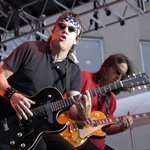