Gaby began acting in commercials at 4 to help pay the family bills but got tired of the work and quit. Gaby's first film role was as young Maisy in 1988's Uncle Buck. Until the summer of 1993, Gaby had lived her entire life with her mother Viva and older sister Alexandra at New York's notorious Chelsea Hotel. Viva and Gaby left in July after a longtime dispute with the management, but the hotel ended up featuring prominently in Gaby's future. Someone Like Me was hatched after one of the show's producers, Gail Berman, read a New York Times article about the Chelsea Hotel that mentioned a children's book that Viva and friend Jane Lancellotti wrote titled Gaby at the Chelsea (a takeoff on the classic Eloise).

Now that she and her mother are ensconced with their two Eskimo dogs in a two-bedroom rental house in Woodland Hills (it was badly damaged in the January 1994 earthquake), Gaby says she misses her former home(the Chelsea Hotel), where she and her best friend, Talya Shomron, would roller-skate in the hallways, spy on the drug dealer across the hall,and dispatch the bellman to fetch ice cream at night from the neighborhood deli. Gaby has had well-received supporting roles in The Man Without a Face (1993), This Is My Life (1992), Field of Dreams (1989), and Sleepless in Seattle (1993). Gaby loved working with Nora Ephron, who directed This Is My Life and Sleepless in Seattle, as well as with co-stars Tom Hanks, Mel Gibson, and the late John Candy, but she found Kevin Costner "bossy". 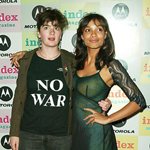 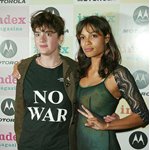