"The truth is that actors don't really have any control over the end product. To think that you have control is a delusion and it's also incredibly frustrating to be investing that much hope into something that essentially boils down to marketing. So you try to do movies that you feel connected with and you work with directors and actors you admire." Gabriel Byrne.

Originally desiring to be a priest but later was expelled from an English seminary, Gabriel Byrne then relocated to Ireland and did a string of odd jobs like a cook, a bullfighter, a teddy-bear-eye installer, an archaeologist and a Spanish and Gaelic teacher at a Catholic girls school. Meanwhile, he began participating in amateur theater and then joined with local theaters in Dublin, the Focus Theatre, an experimental repertory company run by future filmmaker Jim Sheridan, and the Abbey Theatre (for two years).

In 1965, Byrne won the regular role of Pat Barry in the long-running Irish soap opera "The Riordans" and reprised his role in its spin-off series "Bracken" (1978), which nabbed him a Jacob's Awards for Best Actor in a TV Series – Drama. He also debuted in the British feature On a Paving Stone Mounted and was cast in the US-Netherlands drama co-production "The Outsider" (starring an aged Sterling Hayden).

Byrne headed to London in 1979 and signed up with the Royal Court and the National Theatre. He subsequently scored his first significant role as Arthur’s father, Uther Pendragon, in John Boorman’s classic King Arthur epic based on Thomas Malory’s book, Excalibur (1981, starring Nicol Williamson and Nigel Terry). Besides acting in the miniseries "The Search for Alexander the Great" (1981) and "Wagner" (1983), as well as the TV movie Joyce in June (1982), Byrne appeared in the 1983 films like Robert Bierman’s The Rocking Horse Winner, Constantin Costa-Gavras' Hanna K. and Michael Mann's The Keep.

After starring in Kevin Billington’s adaptation of John Banville’s novel, the romantic drama Reflections (1984), Byrne played the lead role of a young reporter for a British daily newspaper, Nicholas 'Nick' Mullen, in David Drury’s political thriller, Defense of the Realm (1985, costarring Greta Scacchi and Denholm Elliott). He then portrayed the title role of Christopher Columbus in the CBS-TV widely received miniseries with the same name and became Mussolini's son Vittorio in the NBC miniseries "Mussolini: The Untold Story" (both in 1985).

Larry Parr then handed him the leading role of a British soldier who is fighting in the trenches of France during World War II in his drama movie based on the novel by M.K. Joseph, A Soldier's Tale (1988, costarring Marianne Basler) and Nick Broomfield gave him the starring role of Hugo, a heir to a fortune who is married to Amanda Donohoe, in his psychodrama film Diamond Skulls (1989).

In the early 1990s, Byrne became a cool-headed enigmatic organized crime lieutenant in the Coen brothers' stylized feature Miller's Crossing and was featured as a fierce pirate in Nils Gaup’s adaptation of O.V. Falck-Ytter’s book, Hakon Hakonsen (a.k.a. Shipwrecked). He then both served as associate producer and starred in Mike Newell’s Into the West (1992) and worked as executive producer in Jim Sheridan’s acclaimed movie In the Name of the Father (1993, starring Daniel Day-Lewis).

Byrne next portrayed a comic book artist who created and then is seduced by Kim Basinger in Ralph Bakshi's fusion of animation and live-action Cool World (1992) and played a government agent who trains Bridget Fonda's convicted murderer to be a hired assassin in John Badham's remake of French director Luc Besson's La Femme Nikita, Point of No Return (1993). He also co-starred as an itinerant handyman in Stephen Gyllenhaal's A Dangerous Woman (1993, with Debra Winger and Barbara Hershey) and landed featured roles in such films as All Things Bright and Beautiful, Royal Deceit, A Simple Twist of Fate, Trial by Jury, Little Women and Jim Jarmusch's Dead Man.

Along with Kevin Spacey, Benicio Del Toro, Kevin Pollak and Stephen Baldwin, Byrne portrayed five career criminals in director Bryan Singer's labyrinthine crime drama The Usual Suspects (1995). The rest of the 1990s watched him acting in the heartwarming drama Frankie Starlight (1995, as a kindly Irish customs officer), Dr Hagard's Disease (1996, also served as executive producer), Mad Dog Time (1996, with ex-wife Ellen Barkin) and Summer Fling (1996, also worked as co-executive producer and screenwriter). He also could be seen in Somebody Is Waiting (1996), Smilla's Sense of Snow (1997, opposite Julia Ormond) and the drama The End of Violence (1997, as a surveillance expert). Behind the screen, Byrne made his directing debut with The Lark in The Clean Air (1996), which he also wrote and produced.

In the HBO comedy Weapons of Mass Distraction (1997) Byrne played a rival executives opposite Ben Kingsley. He followed it up with This Is the Sea (1997, alongside Richard Harris), Polish Wedding (1998, with Claire Danes and Lena Olin), The Man in the Iron Mask (1998) and the World War II romance The Brylcreem Boys (1998, also co-produced). Afterward, watch him acting in Tony Scott's thriller Enemy of the State (1998, as a mysterious surveillance professional), Stigmata (1999, as a Vatican-sanctioned investigator) and the apocalyptical End of Days (1999, as the human incarnation of Satan, starring Arnold Schwarzenegger). Meanwhile, he hosted the "Saturday Night Live" in October 1995, co-wrote screenplay, co-executive produced and acted for the 1977-set teen romance Last of the High Kings, as well as lent his voice in the animated feature Quest for Camelot (1998). He also founded production company Plurabelle Films, named after Anna Livia Plurabelle, a character in James Joyce's Finnegan's Wake.

The new millennium saw Byrne received a Tony nomination as Actor in a Play after starring as James Tyrone, Jr. opposite Cherry Jones and Roy Dotrice in the stage revival of Eugene O'Neill's "A Moon for the Misbegotten.” On the silver screen, he astonished moviegoers with his films like the 2000’s Canone inverso - making love, When Brendan Met Trudy, Virginia's Run and the 2002’s independent feature Spider (as Ralph Finnes' father), the crime drama Emmett's Mark (helmed by Keith Snyder) and the spooky thriller Ghost Ship (as a salvaged vessel captain). He also worked as co-executive producer and co-starred with Dotrice in the ABC fall sitcom "Madigan Men", which tells about three generations of Irish men living under one roof in New York and their romantic life. As for his production company, Plurabelle Films produced the Belfast-set coming of age comedy Mad About Mambo in 2000).

More recent, Byrne added to his acting resume such films as the poker hustlers film Shade (2003, opposite Sylvester Stallone and Melanie Griffith), Vanity Fair (2004), P.S. (2004), an adaptation of Thornton Wilder's 1927 Pulitzer-prize winning novel The Bridge of San Luis Rey (2004, with Robert De Niro, Kathy Bates and Harvey Keitel) and Assault on Precinct 13 (2005). In the following years, he will still grace the screen in several upcoming films, including Wah-Wah, Jindabyne, The Namesake, Leningrad and Played. In 1995, he published his autobiography, Pictures in My Head. He also has released another books, Myths & Tales Of Ancient Ireland and The Woman Who Danced With JFK.

As for Byrne’s most recent news, he reportedly co-Produces New York premiere of “The Blowin' of Baile Gall” by Ronan Noone. It will be starred by Ato Essandoh (has appeared in the films Garden State and Hitch) and will bow at Irish Arts Center from early September to late October 2005.

"People who believe that being incredibly famous or wealthy or powerful is going to make them happier are on a fool's mission. I'm famous enough, that suits me fine. The relentless emphasis on celebrity in this country drives me around the fucking bend. Everywhere you go. The new religion is celebrity, but nobody stops to question what it means when you achieve it. Honestly, I'm scared of the whole notion of fame. You take it on at your own peril." Gabriel Byrne. 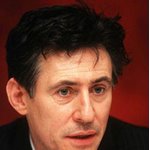 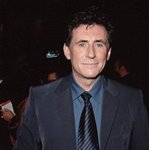 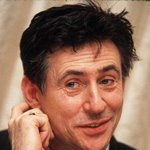