Highmore followed it up with a role as the son of Neil Morrissey and Dervla Kirwan's character in the BBC miniseries “Happy Birthday Shakespeare” (2000) and as a young King Arthur, opposite Anjelica Huston, Julianna Margulies, Joan Allen and Samantha Mathis in the TNT miniseries version of the bestseller novel by Marion Zimmer Bradley, “The Mists of Avalon” (2001), directed by Uli Edel. He also appeared in the CBS movie Jack and the Beanstalk: The Real Story (2001), starring Matthew Modine and Vanessa Redgrave.

In 2004, Highmore returned to the big screen for director Jean-Jacques Annaud's adventure/family film set in 1930s Cambodia, Two Brothers (a.k.a. Deux frères), playing, young Raoul, the lonely son of a French administrator (played by Annaud) who refuses to believe that his pet tiger cub might be dangerous after having tasted blood. That same year, he also had a major part alongside Kenneth Branagh and Eddie Izzard in John Stephenson's straight-to-video fantasy Five Children and It, inspired by Edith Nesbit's 1902 children's book with the same name.

"Smashing up the playhouse, that was really great. Sometimes they'd say, 'Oh, sorry, there was a problem with the sound or the lights.' And I'd say, 'Yes! I get to smash it up again!" Freddie Highmore (on his favourite scene in Finding Neverland (2004)).

Highmore subsequently landed on the role that would catapult his name toward stardom, as the real-life Peter Llewelyn Davies, the inspiration for down-and-out author J.M. Barrie’s (played by Johnny Depp) classic tale “Peter Pan” in Marc Forster's critically-acclaimed adaptation of Allan Knee's play, Finding Neverland (2004). The semi-fictional film was nominated for seven Academy Awards and won one, for Best Original Score by Jan A. P. Kaczmarek. It also earned Highmore a Screen Actors Guild Award nomination for Best Supporting Actor. Kate Winslet, who co-starred as Highmore’s ailing mother in the film, commented about Highmore: “He is quite something else. I would literally get hairs up on the back of my neck watching this kid act. It’s rare that you feel that not only with a child actor, but also any actor you work with. You very rarely have this incredibly unnerving feeling that they’ve completely transported themselves into someone else’s head. With this kid, it’s a scary gift.”

"When I left the set of Finding Neverland, I was quite upset, because I thought I wouldn't see Johnny again, and Charlie wants to go back to the chocolate factory. We both got our wishes." Freddie Highmore.

Impressed by Highmore’s acting ability, Johnny Depp later personally requested him play Charlie Bucket, a plucky and likeable young lad from a poor home who wins a tour through the most magnificent chocolate factory in the world in Tim Burton's Academy Award-nominated adaptation of the 1964 Roald Dahl children's novel, Charlie and the Chocolate Factory (2005), with Depp as the mad candy mogul Willy Wonka. Tim Burton, Charlie and the Chocolate Factory (2005) director, revealed: “I was lucky to get Freddie. The physicality (of Charlie)] was important, and I wanted Freddie to look undernourished. The grandparents are really old and they didn’t have much to eat, and if a strong wind blew, Freddie might just blow away. Those were all important elements and the simplicity of that character, to me, was important . . . He’s just got that gravity and that was really important to it.”

“He has a great family that surrounds him with love. That's what separates him from Willy. Willy has everything, but the one thing he really wants is the love of his family.” Freddie Highmore (talking about his character in Charlie and the Chocolate Factory (2005)).

The next year, Highmore portrayed the younger version of Russell Crowe's Max Skinner in Academy Award-winner director Ridley Scott's take on Peter Mayle's international bestseller, A Good Year. The role later earned Highmore a Broadcast Critics Awards nomination for Best Young Actor. His performance in the film also received praise from Crowe, as he said: “I’m a big admirer of Freddie’s. He is obviously talented, obviously knows the job and is a great puppet master for his emotions and at that age that is unusual.”

Also in 2006, Highmore played the lead role of Arthur, a 10-year-old goes looking for some much-fabled hidden treasure in the land of the Minimoys in a bid to save his grandfather's house from being demolished, in Luc Besson's part-animated, part-live action feature film adaptation of the 2002 children's book, Arthur and the Minimoys (a.k.a. Arthur et les Minimoys). Besson recalled: “I (had) heard about Freddie, but I (had) not seen Charlie and the Chocolate Factory. It was not open yet. I met the boy and I was in shock. I had the same shock 10 years (ago) with Natalie Portman for The Professional. You can tell after one minute. I swear to you, you can tell. He’s intelligent. He’s watching you and understand everything you say and trying (to) do it. He’s perfect. He’s a little genius.” Additionally, Mia Farrow, who played his grandmother in the film, revealed: “Freddie is loads of fun, on lots of levels. It was a great relief to discover Freddie has wonderful parents, who I happily made my friends. Both his father, who is loads of fun, and his mother, who is equally fun, are thoroughly responsible, hilarious - in the best sense - excellent company and excellent parents. Freddie himself has a wonderful family, and he’s a happy child and he seems to love acting. That is, he’s also very good at it. He was magical in Finding Neverland, for example. He was a pleasure to work with. ‘Professional’ isn’t even the right word. He’s thoroughly present in the scene, so it’s easy to work with him. He’s there. And there’s a spontaneity and a commitment that makes him to fun to work with. He’s also good company. We were in Normandy for a chunk of the time, living on Luc Besson’s property. We were all living there, so on weekends we would drive around, and we had meals together. We went to see the beaches of Normandy, and ate crepes together. He’s fluent in French. He’s also an excellent mime, and can imitate people really well, and he has an excellent sense of humour, which I really appreciate. You think he’s quiet but he’s so perceptive.”

Highmore just completed his latest film, August Rush, a drama film directed by Kirsten Sheridan in which Highmore plays the title role, opposite Robin Williams, Keri Russell and Jonathan Rhys Meyers. Talking about filming August Rush in New York, Highmore said: "Coming to New York's been a great experience; it's massive and it's everything. Just being here for three months... you go to a deli or you go to a restaurant, you know; you get the New York experience."

Highmore, who has said not planning to continue acting as an adult, will soon wrap another film, Mark Waters' adaptation of Holly Black and Tony Diterlizzi's bestselling children's book series, The Spiderwick Chronicles, in which he will portray the dual role of twin brothers Jared and Simon Grace. Sarah Bolger will play their sister Mallory and David Strathairn will play Arthur Spiderwick. The film is scheduled for February 29, 2008 release. 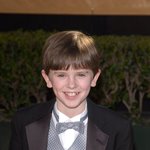 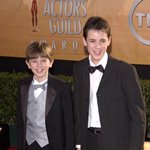 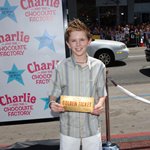 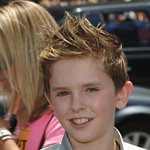 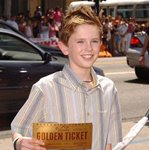 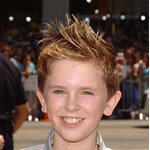