A classically trained pianist, William Drayton was rapping under the pseudonym MC DJ Flavor in a local college radio show at Adelphi University when he first met his future musical partner, graphic design student Carlton Ridenhour, who went by the name of Chucky D (later Chuck D). Along with Professor Griff and DJ Terminator X, the two formed a group called “Public Enemy” in 1982 and released their debut album Yo! Bum Rush the Show five years later. After the release of the critically praised LP, Public Enemy came out as the most important act in hip hop if not all modern-day music.

Flav and Public Enemy have enjoyed international success, with millions of records sold worldwide and extensive touring, and have been named one of Rolling Stone Magazine’s Fifty Greatest Artists of All Time. Their albums include It Takes a Nation of Millions to Hold Us Back (1988), Fight the Power...Live! (1989), Fear of a Black Planet (1990), Apocalypse ‘91...The Enemy Strikes Black (1991), Muse Sick-n-Hour Mess Age (1994), He Got Game (1998), There’s A Poison Goin On (1999), Revolverlution (2002), New Whirl Odor (2005) and Rebirth of a Nation (2006). As hip-hop MC (and comedy relief) of Public Enemy, Flav has also taken center stage on tracks like “Too Much Posse,” the bizarre and unforgettable “Cold Lampin’ with Flava” and “911 Is a Joke.” His stumbling vocal style has influenced many rappers such as Busta Rhymes and the late Ol’ Dirty Bastard.

After gaining wide-ranging prominence with his group, Flav tried his luck as a solo artist. He has reportedly completed two albums, but both of which were refused by his record label, Def Jam. His third LP, It’s About Time, was planned for 1999 release, but it was never released. Flav eventually could launch his solo opus, simply titled, Flavor Flav, on October 31, 2006.

The number one hype-man to ever touch a mic, Flav, also has branched out into television reality career. In 2004, he joined the VH1 “The Surreal Life,” a reality series about desertion celebrities who were hot back in the day, and how they live their day to day lives in one Los Angeles mansion, opposite Charo and Danish actress Brigitte Nielsen, with whom he developed an on-screen relationship. Flav and Nielsen were then recruited to star in the spin-off reality series “Strange Love” (2005), which explored the couple’s odd pairing. Because of mutual jealousy, the couple was continuously combating and yelling, and in March 2005, Brigitte ended her relationship with Flav and opted to live with her Italian boyfriend, Mattia Dessi, instead. “Strange Love” basically ended with the end of the relationship. In the early of 2006, Flav found himself starring in the VH1 reality series “Flavor of Love,” which featured Flav and 20 women (reduced to 15 in the first show, and then 10) from which he would eventually select one (in the style of The Bachelor). 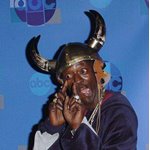 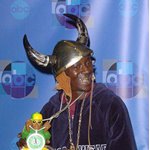 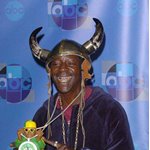