With 98 Degrees, Drew Lachey performed with Montell Jordan and then signed with Motown Records in 1996. A year later, the group’s self-titled debut album was launched, which was ensued by the multi-platinum sophomore recording 98 Degrees And Rising (1998). As a part of 98 Degrees, Lachey did soundtrack work (“True to Your Heart” for Disney’s 1998 animation Mulan), performed at Christmas in Rockefeller Center (2000, TV) and guest starred as himself in the sitcom “Just Shoot Me” (2000).

In 2002, it was announced that 98 Degrees were taking a break. However, it turned out that the group disbanded permanently. Drew Lachey resurfaced on screen, this time as Brad in the Canadian thriller movie The Wisher (2002). He also appeared in several episodes of MTV’s reality series “Newlyweds: Nick And Jessica” (2003-2005) and the special show Nick & Jessica’s Family Christmas (2004, TV), starring his brother and then-wife Jessica Simpson.

Lachey, who in 2003 guest starred in the teen sitcom “Sabrina, the Teenage Witch,” delved into his acting skills on stage with the role of Mark in the Broadway musical “Rent” (2005). On how he acquired the part, Lachey said, “Back when Hairspray was about to go to Broadway, [casting director] Bernie Telsey called my manager and said they were having problems finding a Link Larkin. So I flew to New York, auditioned and worked with Marc Shaiman. I guess Bernie remembered my audition. He asked me about Rent, and the role of Mark was a natural fit.”

In 2006, Lachey co-hosted the Miss USA pageant, alongside Access Hollywood star Nancy O’Dell. In addition, he joined in the second season of ABC’s hit reality show “Dancing with the Stars” (2006). Teaming up with Cheryl Burke, Lachey earned the champion title of the season and was handed a Teen Choice award for Choice Reality Star.

He and Cheryl Burke re-teamed for the “Dancing with the Stars” Tour, (began on December 19, 2006). Other celebrities involved in the tour were Joey McIntyre, Joey Lawrence, Willa Ford, Lisa Rinna and her husband Harry Hamlin. In 2007, Lachey is set to appear in a sport-themed comedy picture titled The Comebacks, directed by Tom Brady. 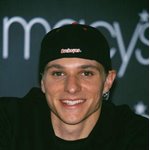