The first thing that strikes a person when they meet Donavon Frankenreiter is that they’ve probably never met a person quite like him before. From his genuine nature, to his big heart, to his all-around charisma, once you connect with his vibe you realize that he is truly unique. Donavon lives an incredible life, one that he never takes for granted. His vocations and drive have enabled him to live the one person’s fantasy, as a reality.

First and foremost, you have Donavon the husband to his wife Petra and father to his sons Hendrix and Ozzy. Their love and presence are the driving force in his life, as can be seen by the beautiful tattoo of the three on his forearm. Next you have Donavon the pro-surfer, who has and continues to travel the world extensively surfing in some of the most popular and also most remote places on the globe. As a matter of fact, both Donavon’s surfboard and guitar case have seen more places than most humans ever will. And of course, you have Donavon Frankenreiter the musician, who is about to release his third, and probably most important album to date titled Pass It Around (Lost Highway).

Donavon’s first record, 2004’s Donavon Frankenreiter was made with the aid of his long time friend Jack Johnson, and spawned the AAA radio hit “Free”. “On my first record, I didn’t have a direction. I just wanted to make a record,” says Frankenreiter. In 2006, Donavon signed with Lost Highway and began to find his own musical voice with the appropriately titled Move By Yourself. “The second one I did myself and it definitely had a direction I felt great about.” On Pass It Around, Donavon collaborates and injects new sounds in ways he had not attempted prior. “On Pass It Around, I definitely had a lot of ideas and it was fun putting trust in other people.”

One of those people was producer Joe Chiccarelli, who aside from being a multiple Grammy Award-winner, has worked with everyone from Frank Zappa to The Raconteurs to My Morning Jacket. Donavon also enlisted some of his dearest musician friends including, Ben Harper on the title track, and Philadelphia’s most famous surfer G. Love, who adds harmonica on “Sing a Song.”

Collaborators can bring out a side of their creative partner that had previously been untapped. This was the case with Grant Lee Phillips and Frankenreiter on the track, “Mansions On The Sand.”

“I had an amazing experience with Grant Lee Phillips. I had a verse of a song and I had no lyrics for and couldn’t find a chorus. So we worked on it together, found a chorus and then let it go for awhile. When he sent it back to me, I was blown away.”

“I’ve always tried to incorporate the visions of the ocean, the tide, the surf in my music. But I never could, because it would be corny. It would be like I would be “in the waves,” he laughs. Frankenreiter’s respect of the ocean and surfing is too deep to bastardize it. It took Grant Lee Phillips aiding Frankenreiter on “Mansions On The Sand” to help him appropriately celebrate the water that he so loves. “And it came together and from a guy who doesn’t surf.” He jokes.

The self-produced Move By Yourself saw Donavon Frankenreiter grow and mature as an artist who became comfortable on his own and in his own skin. On Pass It Around, Frankenreiter followed his instincts, and in the process actually found himself both artistically and stylistically, as a musician and a songwriter.

“I learned a lot. I learned that it’s not all about me, but it’s about coming together and creating the songs together. I learned that I could let go a little. Let somebody else control the production. For me it was a comfortable place to be. I feel like I had to go through what I was going through in order to get to where I am today.”

For Frankenreiter, embracing a change of methodology was vital, not just because he was open to it, it’s what he does: he persistently challenges himself and it’s keeping him honest, humble and open. An example of Donavon’s openness came when a suggestion was made for the track “Your Heart”.

“When I gave Joe the demo, the horn lines you hear were all harmonica. But it was too much like ‘Harvest Moon,’ the Neil Young song,” he says. “So, Joe tells me he hears a mariachi band in there instead. I knew I could trust his wisdom. When I heard it for the first time it was unreal, because if fit so naturally.”

Donavon was humbled as he tracked Pass It Around at the legendary Hollywood studio, Sunset Sound, knowing he was stepping into the same vocal booth that Joplin and Morrison made history in.

“A lot of people in this day and age just want to you to come to their house and use Pro-Tools because it will save thousands of dollars. But it’s about the experience. That’s what I want to feel. I want to touch the walls there. I want to sing into the microphones there. That’s what recording is all about, being in those places where people have been before.”

If there is one song on Pass It Around that is snapshot of Donavon’s organic and non-contrived lifestyle, it is the opening track, “Life, Love and Laughter.” “Don’t look back it won’t do any good/Don’t look ahead you’ll be misunderstood/Everything you need could be right in front of you.” For Donavon that maybe packing up his family and going to a far flung destination or he could be lazing with them at home in Laguna Beach, as long as there’s love in the room, he’s there.

With some old buddies, new compatriots and a new M.O., Donavon Frankenreiter is more than pleased with the music they made together. He concludes, “I feel this is the best body of work I’ve done. This is where I am now and where I’ve come from.” 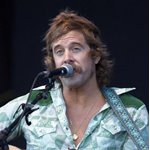 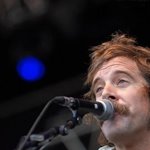 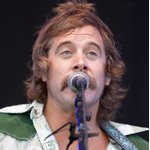