Don Most (born August 8, 1953) is an American actor best known for his role as Ralph Malph on the long-running television series Happy Days. He was born in Brooklyn, New York.

Most performed as a voice actor on several Saturday morning cartoon series. Among these roles were: Ralph Malph on Fonz and the Happy Days Gang (1980); Eric the Cavalier in Dungeons & Dragons (1983); and Stiles on Teen Wolf (1986-1989).

Film credits include EDtv (1999) and Planting Melvin (2005). He also made guest appearances on many TV shows, including CHiPs, The Love Boat, Sliders, and Star Trek: Voyager. He is sometimes credited as Donny Most. 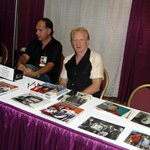