Denny Hamlin is an American NASCAR race car driver. He currently drives the No. 11 FedEx Toyota for Joe Gibbs Racing in the Sprint Cup Series and the No. 18 Toyota in the Nationwide Series. Hamlin was born in Tampa, Florida, but lived in Chesterfield, Virginia for most of his childhood. He began racing go-karts at the age of 7. Afterward, he worked his way up to Late Models by 2004 and signed a development contract with Joe Gibbs Racing.

After running briefly in the Craftsman Truck Series, Hamlin drove a full season in the Busch Series in 2005, while running a few Nextel Cup races. After having great race finishes, Hamlin was given a full-time ride with Joe Gibbs Racing. Hamlin began his racing career in 1988, at the age of 7 years old, racing go-karts. By 1997 at 15 he won the WKA manufacturers cup at the age of 16, he was racing Ministocks. In his first stock car race, at Langley Speedway, Hamlin won the pole position, and won the race. He then progressed to the Grand Stock division in 1998, and moved on to Late Model Stock Cars in 2000. In 2002, he won ten Late Model races, and surpassed that in 2003 with 25 wins, and 30 poles, out of 36 races. In 2004, while competing full-time in Late Model Stock Cars, Hamlin was signed to a driver development contract with Joe Gibbs Racing. Hamlin started the 2007 Cup season by finishing 28th in the Daytona 500. He won his third career cup race at the Lenox Industrial Tools 300 at New Hampshire International Speedway. Following that race, Hamlin finished 43rd in the Pepsi 400 at Daytona International Speedway after being involved in a wreck early on in the event.

This the first ever 43rd places finish in his career. Hamlin clinched a spot in the Chase for the Cup and was seeded sixth, 50 points behind the leader, but finished 12th overall in the final standings. In the Nationwide Series, Hamlin scored three victories including Darlington, Michigan, and Dover in the #20 Rockwell Automation Chevy. Joe Gibbs Racing announced that Darian Grubb will be Mike Ford's replacement as Hamlin's crew chief for the 2012 season. Grubb previously served as crew chief for Tony Stewart, where he helped Stewart to his third Sprint Cup title in 2011.

Hamlin scored his first win of the year in the second event on the schedule, at Phoenix International Raceway. On April 22, Hamlin out-dueled Martin Truex, Jr. to score his second win in the eighth race of the year, at Kansas Speedway. At the Crown Royal Curtiss Shaver 400 at the Brickyard, Hamlin scored his eleventh pole. He won his third race of the year at Bristol Motor Speedway on August 26 in the Irwin Tools Night Race. 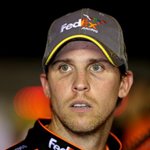 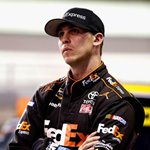 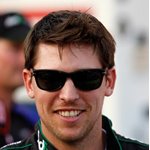 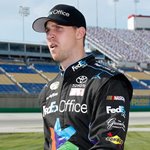 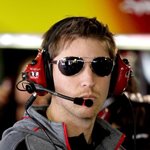 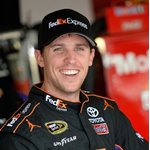 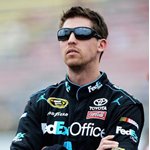 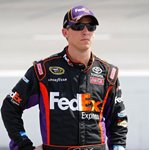