Daughter of a famous English actor, Deborah Moore has started appearing on television since she was 8 years old. She was first seen in a December 1971 episode of her father show, the action/adventure on ITV, "The Persuaders!," and followed it up with an appearance as herself in a February 1972 episode of the documentary "V.I.P.-Schaukel," alongside her brother Geoffrey.

Five years later, Moore was cast in awesome mini-series drama based on the novel by Bert Hirschfield, "Aspen" (1977; aka The Innocent and the Damned), starring Sam Elliott. She subsequently disappeared from screen and would returned eight years later at age 22, in the film Warriors of the Apocalypse (1985), a sci-fi/action by director Bobby A. Suarez.

Billed as Deborah Barrymore, Moore went to support Eric Stoltz and Gabriel Byrne in Academy Award-winner Franklin J. Schaffner's adventure/drama Lionheart (1987), which was loosely based on the historical Children's Crusade, and co-starred in Nello Rossati's sci-fi movie Top Line (1988). She also played the secretary in the biographical TV movie about James Bond author, Ian Fleming, Goldeneye: The Secret Life of Ian Fleming (1989), with Charles Dance in the title role.

Entering the new decade, Moore guest starred in an October 1990 episode of the TV series “Zorro” and joined her father in Michael Winner's independent comedy movie, Bullseye! (1990), which also stars Michael Caine. Afterward, she starred in the kidnapping TV movie Trauma (1991) and co-starred with Anthony Michael Hall and Michael Paré in Fritz Kiersch's independent action/comedy film, Into the Sun (1992).

Meanwhile, Moore gained recognition in her country during 1986 to 1995 as the face of the Scottish Widows advertising campaign. She was later replaced by Amanda Lamb. She also appeared in Brooke Bond tea (1988) TV commercials.

TV audiences subsequently catch Moore in an episode of NBC soap opera "Days of Our Lives" and NBC sci-fi drama series "Quantum Leap." She was also seen in the two-part TV movie Midnight Man (1995) and On Dangerous Ground (1996), both of which starring Rob Lowe and were based on Jack Higgins' novel, as well as the TV-movie version of Neil Simon's comedic play, London Suite (1996; starring Kelsey Grammer, Michael Richards and Julia Louis-Dreyfus) and teh family/fanstasy TV movie Merlin (1998; opposite Jason Connery). 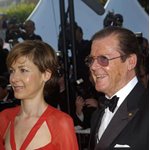 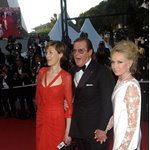 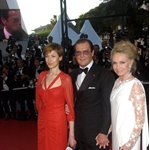