Dean McDermott (born November 16, 1966 in Toronto, Ontario) is a Canadian actor best known for playing Constable Turnbull on the TV series Due South and for his marriage to Tori Spelling.

McDermott has appeared in many TV and movie roles, including the Kevin Costner film Open Range. He received a Gemini Nomination for Best Supporting Actor in 1997 for his portrayal of small town boy Garet French in Lives of Girls and Women. In 2007, he and Spelling co-starred in the reality series, Tori & Dean: Inn Love.

McDermott married Spelling after they met on the set of Mind over Murder. His previous marriage to TV chef Mary Jo Eustace was dissolved in September 2005. McDermott has two sons, Jack Montgomery (born to Eustace in 1998), and Liam Aaron McDermott (born to Tori Spelling on March 13, 2007). He and Eustace also adopted a daughter, Lola, in 2005, but McDermott has joint custody of his son only and is no longer legally responsible for Lola. Dean also has a daughter with Tori, Stella Doreen McDermott ("Doreen" after his late mother), born on June 9, 2008. Both Liam and Stella were delivered by C-section. 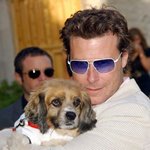