Danny Huston began his career as a painter, but soon gravitated towards directing, following in the footsteps of his famous dad, John Huston. His first gig was directing the main title sequence in his father’s period drama, Under the Volcano (1984). He continued to direct the documentary film Santa Claus: The Making of the Movie (1985), and the made-made-for-television films Bigfoot and the British drama Mister Corbett’s Ghost (both 1987). The latter project starred Paul Scofield, Burgess Meredith and his father. Huston made his big screen directorial debut with the critically praised Mr. North (1988), a modern-day adaptation of Thornton Wilder’s novel. With the help of his father, he got Lauren Becall to appear in his comedy film that starred Anthony Edwards.

After his father’s death, Huston helmed the biopic film Becoming Colette (1991) and the Burt Reynolds- Angie Dickinson psycho-horror flick The Maddening (1995). It was also in 1995 that he started to move in front of the camera as an actor by playing a small role as a bartender in the Nicholas Cage starring vehicle Leaving Las Vegas, directed by Mike Figgis, a career alteration that offered him with better critical notices. He followed it up with more important parts in smaller or slighter-known movies such as Bernard Rose’s remake of Leo Tolstoy’s Anna Karenina (1997), director-writer Daphna Kastner’s Spanish Fly (1998) and Figgis’ experimental Timecode (2000).

Huston graduated to a leading role when director Bernard Rose cast him as Ivan Beckman, a dying Hollywood agent on a wasted seek out sympathy, in the independent drama Ivansxtc (2000). The role brought the actor international attention as well as an Independent Spirit nod for Best Male Lead. Returning to supporting roles, he portrayed a crooked business man in the drama Eden (2001), a menacing hotel manager in Mike Figgis’ experimental ensemble piece Hotel (2001), and Naomi Watt’s unfortunate husband in Alejandro Gonzalez’s 21 Grams (2003), from which he won a Phoenix Film Critics Society for Best Ensemble Acting, sharing with Watts, Sean Penn and Marc Musso, among others.

Huston’s growing profile was further confirmed in the following when he was hired to work in three high-profile films. He first was cast as an ex-reporter turned scruffy private detective in writer-director John Sayles’ political satire and murder mystery Silver City, and then portrayed Nicole Kidman’s affluent fiancée in the Jonathan Glazer-helmed romantic thriller Birth. He even picked up a Screen Actors Guild nomination for Outstanding Performance by a Cast in a Motion Picture for his work in the Martin Scorsese epic biography The Aviator, appearing as the president of TWA airlines who persuaded legendary billionaire Howard Hughes (Leonardo DiCaprio) to conquest the ailing airline.

2005 saw Huston deliver his most captivating and calculated performance to date when he portrayed the conventional associate and friend of a British diplomat whose wife is bafflingly murdered in Academy Award-nominated director Fernando Meirelles’s dazzling film The Constant Gardener. For his impressive performance, he was handed a Satellite for Outstanding Actor in a Supporting Role. The same year, he offered a villainous supporting part as the brutal Arthur Burns in the critically acclaimed film The Proposition, which starred Guy Pearce.

Recently, Huston made his television movie debut in Covert One: The Hades Factor (2006), starring Stephen Dorff and Mira Sorvino. He also appeared with Kristen Dunst in Sofia Coppola’s Marie Antoinette (2006), played Jim Ferris in Alpha Male (2006) and teamed up with Clive Owen and Julianne Moore in Alfonso Cuaron’s futuristic tale Children of Men (2006).

The in-demand performer has recently completed Oliver Parker’s thriller movie Fade to Black (2006), playing Orson Wells. He also has two films in post-production: I Really Hate My Job, opposite Neve Campbell and Shirley Henderson, and the Jim Carrey vehicle The Number 23, both for 2007 release. Huston is currently filming 30 Days of Night, a horror/thriller for director David Slade. 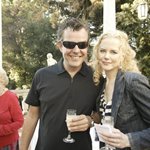