While he's never been a typical leading man, Crispin Glover has distinguished himself as one of the most intriguing personalities in the movie business. His unusual characters and avant-garde hobbies have inspired a cult-like following that has dubbed him both madman and genius.

The son of actor Bruce Glover, Crispin Hellion Glover was born in New York City and raised in Southern California. He picked up his father's trade while still in elementary school--by age 13, he already had an agent scouting out parts. A lead in a stage production of "The Sound of Music" (starring Florence Henderson) led to guest spots on the TV shows "Happy Days" (1974), "Hill Street Blues" (1981) and "Family Ties" (1982), which in turn led to roles in made-for-TV movies. The adolescent Glover felt "confined" by TV work, however, so he opted to stick to movie parts. He made his big-screen debut as a sex-starved teenager in My Tutor (1983), then followed up with a supporting role in Friday the 13th: The Final Chapter (1984).

Glover's most defining Hollywood moment happened the next year, when he appeared as George McFly (Michael J. Fox's father) in the instant classic Back to the Future (1985). The whiny underdog character struck a chord with moviegoers, and for years Glover would be known primarily as "that guy from 'Back to the Future'". Oddly enough, the actor delivered one of his favorite performances around the same time - playing a small-town kid obsessed with Olivia Newton-John in the indie The Orkly Kid (1985)--but the smaller film was completely overshadowed by his commercial success. Glover did, however, receive critical praise for his next indie role, a starring turn as a high-strung murder witness in River's Edge (1986). Excited by the chance to explore more adventurous projects, he turned down an offer to reprise McFly in Back to the Future Part II (1989). The producers brought the character back to life by splicing together archived footage and new scenes (using an actor in prosthetic makeup). Glover, who hadn't given permission for his scenes to be recycled, sued the film's producer, Steven Spielberg, and won. The case prompted the Screen Actors Guild to devise new regulations about the use of actors' images.

In 1990 Glover teamed up with fellow eccentric David Lynch to play the maniacal Cousin Dell in Wild at Heart (1990). He filled the next decade with similarly quirky, peripheral roles, including a turn as Andy Warhol in The Doors (1991) and a cameo as a train fireman in Jim Jarmusch's Dead Man (1995). His small but memorable appearances in films like What's Eating Gilbert Grape (1993), Even Cowgirls Get the Blues (1993) and The People vs. Larry Flynt (1996) often outshone the main action.

When he's not stealing scenes from Hollywood hotshots, Glover pours his considerable energy into other creative endeavors. He wrote his first book, "Billow Rock", before age 18, and since then he's gone on to create a library of peculiar titles (several of which have been published through his family's Volcanic Eruptions press). Among his most famous volumes are "Rat Catching" and "Oak-Mot", both Victorian-era stories updated with macabre illustrations and cut-up text. In 1989 he released an album of spoken word readings and cover tunes (including a rendition of "These Boots Are Made for Walkin'") entitled "The Big Problem [does not equal] the Solution. The Solution = LET IT BE."

In 1995 Glover began shooting his directorial debut, What Is It? (2005), a surreal film populated entirely by actors with Down's Syndrome. He later pulled footage from the film into a touring one-man show, "The Big Slide Show," which also incorporated snippets from his books and albums. The artist in Glover claims to be inspired by "the aesthetic of discomfort," a theme which has carried over into his public behavior. During a guest stint on David Letterman's NBC show in 1987, Glover emerged wearing a wig and platform shoes, then delivered a swift kick toward Letterman's head that prompted the producers to cut to a commercial. The actor has kept a relatively low profile over the last few years, but fans may have more wacky antics to look forward to as he slips back into the public eye. Late 2000 saw him hitting the multiplex with roles in Nurse Betty (2000) and Charlie's Angels (2000), and a handful of other Glover projects loom on the not-too-distant horizon. 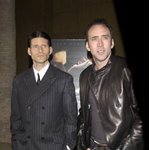 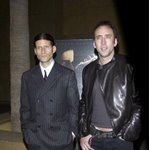