Clayton Holmes Grissom was born in Raleigh, North Carolina 30 November 1978 to his mother, Faye Aiken Parker and his late father, Vernon Grissom. When Clay was a teenager, he had a love for teaching and helping young children and later on studied to became a school teacher. When he was about 23 years old, a longtime friend persuaded him to audition for American Idol. When he was 25 years old he released his debut album, "Measure of a Man." (singles from his debut album include: "Invisible," "This Is The Night" and "The Way") His debut album sold over 600,000 copies in the USA in its first week of release. It has sold almost 2.5 million in the US as of 4/16/04. 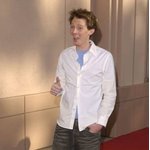