Christopher Anton Knight was born November 7, 1957 in Manhattan, New York, the second of four children: three boys and one girl. Around the time he was three, his family moved to Los Angeles, where his father, an actor, later began seeking auditions for his two oldest sons as a means of saving money for their college education. Although both Christopher and his older brother Mark tried out, only Christopher was offered parts.

At the young age of seven, he began landing appearances in commercials for companies such as Toyota, Tide, and Cheerios and in television shows such as "Gunsmoke" (1955) and "Mannix" (1967). Soon, however, he found himself involved with what would become one of the most successful television shows of all time. Partially because his dark looks matched that of Robert Reed who was already cast as the show's father, Christopher won the part of the middle brother, "Peter Brady", in "The Brady Bunch" (1969). Airing from September 1969 through August 1974, the show was highly popular with teenagers of that era. Although ending thirty years ago, it acquired instant syndication and has never since left the airways.

Being a reluctant icon as well as having an innate interest in science and machines led Christopher to his new career in the computer industry in 1988. Constant celebrity status from youth has provided him with people skills and has proven to be excellent preparation for life in sales and marketing. Entering the industry as an account sales manager at Martec, Inc., he logged the company's first $1 million sales order within his first eighteen months, quickly becoming Martec's top performer, and employee of the year.

In October 1989, Christopher took the responsibility of Vice President of Design System Marketing and Sales at New Image Industry, moving the company into 3D rendering/imaging technologies. Then in mid 1991, he, and a few other key employees successfully moved the software engineering staff and the 3D technologies into a new privately held company, Visual Software. As co-founder of Visual Software, Christopher was a pioneer in the consumer 3D graphics market. His efforts were responsible for enormous sales growth, moving the company from $.4 million annual sales to $4.2 million within 10 months. Visual Software was acquired by Micrografx in January.

In February of 1996, he took on the responsibility of Vice President of Sales at Adesso, a Keyboard manufacturer, providing keyboards for Macintosh and PC/Win95 systems, where he oversaw a doubling of sales within his first four months.

He and Mr. Paniagua reunited again in August of 1997 at Integrated Micro Solutions (I.M.S.) which later became IXMICRO. Initially hired in the capacity of Vice President of Strategic Marketing, Christopher was promoted to Vice President of Marketing after only four months. With Mr. Paniagua, he was able to influence annual sales from less than $2 million in early 1997 to $63 million in 1998.

In late 1998, Christopher would again team up with Paniagua and another associate, David Smith, to form Eskape Labs. Knight, Smith and Paniagua had all been part of IXMICRO's executive staff when the company decided to concentrate on a path divergent from the common interests of the three. Sensing a shift in the focus of the computer technology industry beyond the personal computer to intelligent devices, Eskape Labs was born. The company's mission, to provide "on wire" digital appliances that easily plug into computers, has led Eskape to develop a number of first-to-market video devices. Eskape Labs was purchased by Hauppauge Computer Works in the summer of 2000. Hauppauge is the world's largest manufacturer of computer based TV tuner products and, with Eskape Labs, now has a line of TV tuners compatible with the Macintosh.

Christopher continued to work for Hauppauge Computer as the head of the Eskape Labs brand until the spring of 2003, and then as a consultant to the company throughout the remainder of the year.

Mid-year 2003, he became more involved on an executive level with an investment that had taken flight and was in need of interim management. Casting Networks Inc. (doing business as LA Casting and SF Casting) is an online (web based) talent exchange. Nine months from the introduction of the service to the Los Angeles commercial casting marketplace in late 2002, LA Casting had completely revolutionized the casting process by replacing archaic and time-consuming methods of handling clients' information with a much more efficient method using the Internet.

While Christopher's career in the high tech industry has prevented much involvement in entertainment, it did not constitute a full retirement from show business; he has starred or otherwise participated in the abundance of Brady films, television movies, series, gatherings, discussions and retrospectives. Christopher also has utilized his celebrity status by serving as host and/or spokesperson for several projects. In 2003, for example, Christopher hosted the series "TV Road Trip" for the Travel Channel and was involved with the celebrity version of Discovery Health Channel's "Body Challenge," for debut in the fall of 2004. This year also marks the fourth consecutive year that he has been the spokesperson for the American Counseling Association's "Healthy Skin, Healthy Outlook" campaign, which has received the Gold Triangle Award recognizing excellence in public education of dermatology issues the past two years. In 2002-2003, Christopher also was privileged to be the spokesperson for the National Consumer League's "AD/HD Campaign to Inform the Nation," speaking in Washington D.C. at the National Press Club on the sensitive subject of AD/HD (Christopher himself was diagnosed with lifelong ADD at the age of 40). The campaign's laudable goal is to broadcast the truth about AD/HD, dispelling myths and tearing down the barriers of ignorance and stigma that prevent AD/HD sufferers from obtaining the proper diagnoses and medical treatments they need.

Cognizant of his celebrity status and seasoned by maturity, Christopher is ready and eager to return more fully to the industry that gave him his start and to expand his public identity, but his plan to re-establish his place in the entertainment industry is not designed to displace his interests in the corporate world.Once and forever a Brady! Christopher Knight met life as a child actor, starring as "Peter Brady" in the TV classic hit show "The Brady Bunch" (1969). A reluctant icon, Christopher has focused his adult years on interests beyond the entertainment industry, particularly the corporate world of computers and high technology. Yet, due to the omnipresent and flourishing legacy of all things Brady, Christopher's successful endeavors beyond show biz exist in peaceful subordination to his portrayal of Peter and his arguably estimable contribution to American pop culture. So in an act of self-unification, Christopher is returning to his entertainment roots and is seriously exploring his options as an actor, host, spokesperson and erstwhile entertainment figure.

Christopher's corporate existence in his adult years didn't constitute a full retirement from show business - he has starred or otherwise participated in the plethora of periodic Brady films, television movies, series, gatherings, discussions and retrospectives. Christopher also has exploited his status as an entertainment figure by availing himself to several projects as a host and spokesperson, including projects such as the American Counseling Association's 2002 & 2003 "Healthy Skin, Healthy Outlook" campaign that went on to received the Gold Triangle Award both years Knight served as spokesperson. Christopher was also privileged to be the spokesperson for the National Consumer League's "AD/HD Campaign" speaking in Washington DC at the National Press Club on the sensitive subject of AD/HD, as he himself is an adult with ADD. Most recently, Christopher was brought on as the spokesman for a popular personal fitness product, Ab Lounge XL®.

In 2003, he was asked to host a segment on the Travel Channel series' "TV Road Trip" starring the late John Ritter. When the series was optioned for a second cycle Christopher was offered to "Host" the series. It was in fact this participation that lead to the rekindling of Christopher's interest in front and behind the camera.

Christopher was soon signed up for the celebrity version of Discovery Health Channel's "Body Challenge," which debuted in the fall of 2004 and then to his unforgettable participation on VH1's Surreal Life 4. The explosion of popularity and "new found fame" as a result of this #1 VH1 Hit that has also lead to his high-profile romance with Surreal Life co-star and "America's Next Top Model" (2003) winner Adrianne Curry, has placed Knight squarely back in the spotlight. Grateful at this unique second opportunity at an acting career, Christopher relishes the chance at experiencing celebrity now as a seasoned, experienced, "well-baked" adult.

In 2005, his on-screen endeavors included special guest appearances on shows such as WB's "Blue Collar TV" and ABC's "Less Than Perfect". He has also starred as the lead in the independent film, "Light Years Away", co-starring Eric Robert. Last, but certainly not least, Knight has been working on several projects with his now girlfriend model and TV personality Adrianne Curry, projects, that will surely keep his fans glued to the screen for a long time to come. 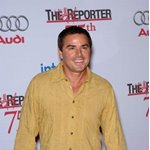