In the eighth game of the season (a 117-109 home win against the Toronto Raptors), Anthony tied the franchise record of six-straight 30-point games recorded by Alex English (1982-83 season).He fell short of establishing a new record in his ninth game (a 113-109 home victory over the Chicago Bulls on November 21, 2006), as he finished with 29 points.After the Chicago victory, Anthony again tied the club record of six-straight 30-point games, failing to break it the second time around, as he scored 24 points in his 16th game (a 98-96 home loss to the Atlanta Hawks) on December 6, 2006).

On December 16, 2006, Anthony was one of many players involved in the infamous Knicks-Nuggets brawl during a game at Madison Square Garden.Footage showed Anthony laying a punch on the face of New York's Mardy Collins As a result of his actions, Anthony was suspended for 15 games by NBA commissioner David Stern.Shortly thereafter, the Nuggets traded for Allen Iverson in a bid to form a deadly combination with Anthony. The duo didn't get to play alongside one another until a home game against the Memphis Grizzlies on January 22, 2007, which was the day Anthony was allowed to return from his 15-game suspension.Anthony finished the game with 28 points, as he and Iverson combined for 51 points.

When the reserves for the Western Conference All-Star team were announced, Anthony was left off of the roster.However, with Yao Ming and Carlos Boozer out with injuries, NBA commissioner David Stern chose Anthony as a replacement (along with Josh Howard).Anthony scored 20 points with 9 rebounds in his All-Star debut.

On February 2, 2007, Anthony and fellow teammate J.R. Smith, were involved in a minor car accident.[24] Neither player was injured in the collision. The only information released by the team was that the car Smith was driving belonged to Anthony.

Anthony won Player of the Week honors three times during the season (November 20-November 26, 2006; November 27–December 3, 2006; and February 5-February 11, 2007). Anthony also took home Player of the Month honors for April 2007, after leading the Nuggets to a 10-1 record for the month and into sixth place in the final regular season standings of the Western Conference. Anthony finished the season as the league's second leading scorer behind Bryant, with an average of 28.9 ppg, while adding 6.0 rpg, 3.8 apg and 1.2 spg.

For the second time in three years, Anthony and the sixth-seeded Nuggets faced the third-seeded San Antonio Spurs in the first round of the playoffs. In a virtual repeat of the 2005 first round playoff matchup between the two teams, Denver won the first game in San Antonio, 95-89, only to lose the next four games. The Nuggets were eliminated in the first round for the fourth straight year. In the playoff series against the Spurs, Anthony averaged a team-high 26.8 ppg to go along with 8.6 rpg, 1.2 apg and 1.0 spg. 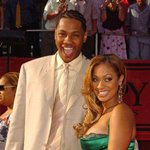