Busta Rhymes, with Leaders of the New School, penned a recording contract with Elektra Records in 1989 and gained a mass of fans with their debut album A Future Without a Past (1991). Still in 1991, Rhymes and his group were featured in A Tribe Called Quest’s hit “Scenario,” which was soon noticed for Rhymes’ unique and flowing style. Leaders of the New School also went to the screen as a musical guest for the show “In Living Color” (1991).

Still under Elektra Records, Rhymes released a first solo album named The Coming (1996), which spawned the US and UK Top 10 single “Woo-Hah!! Got You All in Check.” The album went platinum and perched on the 6th position on the US Album chart. The Coming also featured the Top 7 US Rap entry “It’s a Party” (featuring Zhane), as well as “Do My Thing.”

The sophomore recording When Disaster Strikes (1997) fared even better by becoming the Top 3 US Album, thanks to the widely known singles “Put Your Hands Where My Eyes Could See,” “Dangerous” and “One” (featuring Erykah Badu). Later, the new version of the second platinum album generated the chart topping “Turn It Up (Remix)/Fire It Up” (1998). Aside from his solo career, Rhymes also joined forces with rappers Rampage, Lord Have Mercy, Spliff Star, Rah Digga and Baby Sham to make a collaborative project named Flipmode Squad, with which he released The Imperial (1997) album.

Extinction Level Event (The Final World Front) was Rhymes’ third studio album, which was issued in 1998. Presenting an apocalyptic theme, the platinum album enjoyed a transatlantic success with the UK No.5 track “Gimme Some More” and “What’s It Gonna Be” (featuring Janet Jackson), which ruled both the US R&B/ Hip-Hop and US Rap charts. It was then followed with Anarchy (2000), Rhymes’ final album under Elektra Records, which also received platinum certification.

As for his onscreen career, the rapper once appeared in an episode of “Cosby” (1997) and did voiceover work for Reptar Wagon in The Rugrats Movie (1998). The musical guest of a 1999 episode of Saturday Night Live, Rhymes resumed his acting performances with the supporting role of Rasaan in the action thriller Shaft (2000) and Terrell Wallace in the Sean Connery-starring drama Finding Forrester (2000).

Signing himself to newly formed label J Records, the artist launched the platinum recording Genesis in late 2001. For the album, Rhymes collaborated with hip hopper Kelis in “What It Is” (2002) and featured the cover of The Neptunes’ hit called “Pass the Courvoisier.” The new version of the album included the track “Pass the Courvoisier, Part II,” featuring rapper P. Diddy and Pharrell Williams. Apart from the studio album, the singer also tossed out the greatest hits compilation album Turn It Up: The Very Best of, in 2002, which went silver in the UK.

Rhymes, who also took roles in the big screen crime thriller Narc (2002) and Rick Rosenthal’s Halloween: Resurrection (2002, as Freddie Harris), worked on his next album, It Ain’t Safe No More (2002). Setting off “Make It Clap” (Remix, featuring Sean Paul and Spliff Star) and the better-known “I Know What You Want” (featuring Mariah Carey and Flipmode Squad), the recording received moderate response due to its club-oriented music. Soon after the release of his 2002 album, Rhymes left J Records and joined Dr. Dre in his label Aftermath Entertainment.

After appearing in Death of a Dynasty (2003), Rhymes costarred as Joshua Pope, opposite Shaun Baker and Xzibit, in the action thriller Full Clip (2004). He also took part in several direct-to-video releases and lent his voice for Magic, a character in the video game Def Jam Fight for NY (2004), along with Snoop Dogg, Method Man, Fat Joe and many others.

With the new label, Rhymes released a second greatest hits album titled The Artist Collection: Busta Rhymes (2004), which apparently did not perform very well on the charts. His 2006 appearance in the Pussycat Dolls’ debut single “Don’t Cha” fared better, staying at the top of the U.S. Hot 100 chart.

Recently, the rapper made headlines with his latest album, The Big Bang (2006). The seventh studio album quickly peaked at the top of the US Album chart and reached No.19 in the UK, earning him silver certification. After bringing out the No.1 US Rap hit “Touch It,” the recording also treated Rhymes’ fans with “I Love My Chick” (featuring Kelis and will.i.am of Black Eyed Peas), “New York Shit” (featuring Swizz Beatz) and “In the Ghetto” (featuring Rick James). 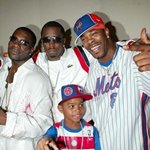