The daughter of actors, Brooke Adams attended New York's High School of Performing Arts and the Institute of American Ballet, and took private acting lessons from Lee Strasberg. At age 6, Brooke made her Broadway debut in the 1954 revival of Finian's Rainbow. Eleven years later, she was cast as Burl Ives' teen-aged daughter in the extremely short-lived TV sitcom O.K. Crackerby. She then kept a low professional profile until making her adult off-Broadway bow in 1974, appearing in yet another revival, The Petrified Forest.

A great future was predicted for Brooke when she starred as Abby, the romantic bone of contention between Richard Gere and Sam Shepard in the critically acclaimed 1978 film Days of Heaven. That same year, she played the Dana Wynter role in the remake of Invasion of the Body Snatchers, and in 1979 she was Sean Connery's ethereal leading lady in Cuba. Any one of those three roles could have spelled superstardom for Brooke--had she really wanted to be a superstar. Instead, she has deliberately avoided the trappings of celebritydom, preferring to measure her achievements by her own standards rather than Hollywood's. And, if that meant accepting "small" but artistically rewarding theatrical projects or teaching acting classics to emotionally disturbed children, rather than accepting a role in the latest Spielberg or Scorcese blockbuster, so be it.

Brooke Adams' more notable credits of the last 15 years have included guest appearances on TV's Moonlighting, the Broadway production The Heidi Chronicles, the narration chores for the speculatively 1994 miniseries The Fire Next Time, and the role of Ione Skye's hardscrabble mother in Gas, Food, Lodging (1992). 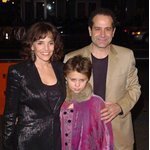