Bobbie Diane Eakes (born July 25, 1961 in Warner Robins, Georgia) is an Emmy Award-nominated American actress. Before she started acting, she was Miss Georgia 1982, and studied at the University of Georgia. She received bit roles on nighttime television series, such as Cheers, before becoming successful in the soap opera genre.

She is most known for her role as Macy Alexander on the soap opera The Bold and the Beautiful, which she played from 1989 to 2000 (on contract), 2001 (guest appearance) and from 2002 to 2003 (on contract). A very popular "good girl" kind of character, Macy battled with her inner demons (including an addiction to alcohol) before finally finding happiness with Thorne Forrester (played by Jeff Trachta and then Winsor Harmon). On the show, Macy was an accomplished singer in her own right (in tune with Bobbie Eakes' hobby).

On July 7, 2000, her character died in a fiery explosion when her car crashed into a gasoline truck when the writers of the show felt Bobbie's character, Macy Alexander didn't contribute to the storyline anymore. She was brought back to the show during the B&B location shoot at Portofino, Italy in December 2002, and was then killed off after a chandelier fell on her during a concert in 2003. The decision was made to kill Macy off a second time when Eakes had decided to take the role of Krystal Carey Chandler on All My Children. The role of Krystal is loosely based on Eakes' Southern upbringing.
Eakes also starred in productions of Cinderella and Love Letters opposite her former costar Jeff Trachta in Los Angeles. The two are still friends offscreen. The CD they recorded together, "Bold and Beautiful Duets", went double-platinum in Europe.
Eakes has been married to writer/actor David Steen since July 1993. They met in acting class. 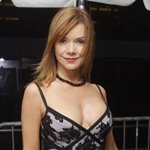