Fully matured, an Aries spirit aspires to a courageous "never say die" attitude, and an eagerness to take advantage of every new opportunity that comes along. Their fun-loving approach to life and youthful nature is admired by many. Born in Gardena, California on March 26th, Billy Warlock is an Aries in every way.

In early 2004, Billy Warlock moved from his long-time home in Southern California to New York City to pursue an opportunity on Broadway. He portrays "Felix" in the Off-Broadway play titled "The Normal Heart" which opens April 6, 2004 at the Public Theatre in Manhattan.

In June of 1997, Billy Warlock was offered the role of A.J. Quartermaine on ABC's highest rated daytime drama, General Hospital. Heir to his family's multi-national holdings, and multi-leveled domestic squabbles, A.J. Quartermaine has his hands full balancing between the man his parents want him to become and the mature adult that he desires to be. But Billy brings with him to the role an intense maturity and refined skill. The character of A.J. Quartermaine is a difficult one to play. He's an alcoholic, he's misunderstood, he's angry, yet he's loving and flirtatious in a way only Billy Warlock could portray. Billy had the difficult task of taking on the role of an established character, but he did it with style and he did it well. He coined the perfect devilish grin that is now classic A.J.. 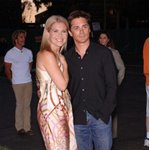