A film and stage actor who got his big break as one of the original cast members of the Pulitzer Prize-winning Broadway production of -Rent, Anthony Rapp has appeared as a supporting actor in a number of films. Born in the Chicago suburb of Joilet on October 26, 1971, Rapp had acting aspirations even as a young child, and at the age of ten, he managed to land the title role in a Broadway production of -The Little Prince. Unfortunately, the show didn't make it to opening night, but Rapp subsequently found work in a touring company of The King and I, and at the age of 14, he won an Outer Critics Circle Award for his performance in the Broadway production of -Precious Sons.

Rapp made his film debut at the age of 15 with a lead role in Adventures in Babysitting (1987). After graduating from high school, he moved to New York City and attended NYU until he dropped out to pursue film work in California. He appeared in supporting roles in such features as Dazed and Confused and Six Degrees of Separation (both 1993) and did some directing and scriptwriting, but it was not until he was cast as the narrator of -Rent that his career began to take off. The play's success guaranteed Rapp both steady work and new opportunities, and he stayed with the production until 1998, closing it in London's West End. He also continued to appear on the big and small screens, doing guest stints on such shows as The X-Files and popping up in character roles in such films as Road Trip (2000), which cast him as an unctuous college student. 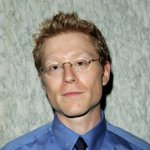