Alona Volodymyrivna Bondarenko popularly known as Alona Bondarenko is a leading tennis player from Ukraine born on 13th August 1984 in Kryvyi Rih, Soviet Union. Her younger sister Kateryna Bondarenko is her doubles partner and so was her elder sister Valeria previously. Encouraged and coached by her mother she began playing tennis at an early age. Natalia Bondarenko, her tennis enthusiast mother encouraged all the three daughters to play tennis and turned to be their guiding spirit in the game. On 14th April 2008, Bondarenko ranked no.19 which is the highest singles ranking in her career. Bondarenko claimed the Australian Open doubles title in association with sister Kateryna, beating the opponent pair of Shahar Pe'er and Victoria Azarenka in the finals in 2008.

Alona Bondarenko made her first grand slam appearance on the Australian soil by participating in Australian Open in 2005; she faced a first round defeat to 6th seed and former country mate Russian Elena Dementieva. Later, Alona achieved her first Women’s Tennis Association tour quarterfinal in the Thai city Pattaya, however her winning sequence came to an holt when she got defeated in straight sets to Anna-Lena Grönefeld of Germany.

Alona Bondarenko reached her debut tour final against Sania Mirza at Hyderabad Open in 2005, which made her listed among the top 100 women tennis player’s as per ATP, but was defeated in three close sets. Alona Bondarenko has managed to break into the 3rd round of Wimbledon through her victory over Tatiana Golovin of France. In 2006, Alona Bondarenko climbed the ranking order and found a place among the top 50 players. Alona’s game spirit made her reach three quarter-finals at, Bangalore, Prague and Hobart, and a semifinal entry at Rabat. Bondarenko claimed victory in an International Tennis Federation title at Orange city in California and her partnership with Anastasiya Yakimova achieved success in doubles at WTA tour women’s doubles title in Istanbul.

On 7th May, 2007 Bondarenko bagged the 2nd position to star player Justine Henin at the prestigious J&S Cup held at Warsaw, Poland. In the semi-finals match, Alona Bondarenko got the first ever top ten achievement of her career by defeating then number five player Svetlana Kuznetsova . This performance landed her among the top 30 at the 29th position.In the same year Alona Bondarenko reached the semifinals of the prestigious Istanbul Cup where she was defeated by Elena Dementieva. She also reached the quarterfinals at Linz, Zurich, Hertogenbosch, New Haven and Birmingham.

On 17th October, 2007 Bondarenko defeated Amélie Mauresmo at the Zürich Open in 2007, the victory gave her, her first ever Tier I quarter-final spot, however Alona could not break into the semifinal and got defeated at the hands of Nicole Vaidišová of Czech republic. On 22nd October 2007, Bondarenko passed $1000000 in prize money milestone, the first player from Ukraine to achieve this milestone.

On 25th January 2008, Alona Bondarenko won women's doubles title, pairing with her sibling Kateryna at the Australian Open. They claimed victory by defeating the opponent pair of Victoria Azarenka and Shahar Peer. The Bondarenko sisters were only the second pairing of sisters to claim the doubles title after the famed William sisters.

Ukraine had great medal hopes on Bondarenko and her sister, In 2008, Beijing Olympics luck didn’t favor Bondarenko to win even the bronze medal as she was defeated by Chinese doubles players, Yan Zi and Zheng Jie. Alona Bondarenko’s also shares a place in the world of advertising with famous tennis star Anna Kournikova as the co-spokes person for K-Swiss. 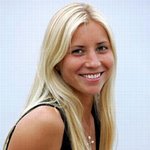