A shortstop by trade, Alfonso knew he'd have to find another position if he hoped to play for the Yankees in 2001. Derek Jeter wasn't going to play anywhere but short and Chuck Knoblauch was entrenched at second base. Alfonso went to left field in spring training, but after Knoblauch couldn't overcome his throwing problems, the two switched positions. Knoblauch left the Yankees at the end of the season, but Alfonso isn't going back to the outfield. He adapted quite well to his new position in 2001 and led the Yankees, as well as all major-league second basemen, with 43 stolen bases. He displayed good power -- hitting 18 homers and 73 RBI to go with a .268 batting average -- and finished third in the voting for American League Rookie of the Year behind Seattle's Ichiro Suzuki and Cleveland's C.C. Sabathia. Alfonso had an excellent postseason, as well, and even hit a dramatic ninth-inning home run to win Game 4 of the ALCS against the Mariners.

Growing up in the Dominican Republic, Alfonso probably never heard the great baseball expression "a walk's as good as a hit." He's a free swinger who didn't draw his first base on balls in 2001 until his 25th game of the season. In addition to his speed, Alfonso has the arm and range to become a steady defender. He was actually signed by Hiroshima of the Japanese League when he was just 16 years old. After three seasons in Japan, he "retired" so he could sign a free-agent deal with the Yankees in 1998. 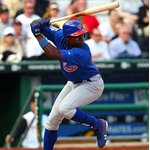