Adam Hann-Byrd (b. February 23, 1982, New York City) is an American actor perhaps best known for his role as Fred Tate in Little Man Tate or as Charles 'Charlie' Deveraux in Halloween H20: 20 Years Later. He has also appeared in films such as Jumanji and The Ice Storm

In 2004, Hann-Byrd graduated from Wesleyan University in Connecticut with degrees in psychology and film studies. Hann-Byrd is currently living in Los Angeles, CA and appears to be entertaining acting options in future films. Additionally, 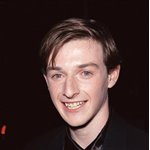