Aaron Tippin was born July 3, 1958, in Pensacola, Fla., and raised in Traveler's Rest, S.C. He performed in local honky-tonks in the 1970s, and when his teenage marriage fizzled, he pursued music with a vengeance. He competed on TNN's You Can Be a Star talent contest in 1986, landed a song-publishing contract and moved to Music City in 1987.

Always a focused and purposeful man, he took up competitive weightlifting, eventually building his frame to a 47-inch chest and 16-inch biceps. He worked the midnight shift at a factory in Kentucky, commuted to Music Row to write songs, did his late afternoon strength training, went to bed, got up and did the whole routine over again, day after day. The dedication paid off. He won barbell competitions, and Charley Pride, David Ball, Mark Collie and others recorded his songs.

Tippin performed his first Nashville nightclub show in 1990, and it earned him a contract with RCA. His ambitious first single "You've Got to Stand for Something" cracked the Top 10 in 1991, and 1992's "There Ain't Nothin' Wrong With the Radio" stayed at No. 1 for three weeks. His twangy, nasal vocals may have prevented a more consistent track record, as Tippin scored a total of six Top 10 hits for RCA. (In all, he charted 19 songs for the label.) He moved to Lyric Street in 1998 and charted a No. 1 with the raucous "Kiss This" (co-written with wife Thea) in 2000. In the wake of 9/11, his patriotic anthem "Where the Stars and Stripes and the Eagle Fly" peaked at No. 2. 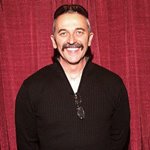