Ask Aaron Neville when he first knew that his voice was something special, and he has a ready answer. "It was the day I was born" he says with a little grin. "The doctor slapped me, and I said "Ah-aaaah!"

What follows is one of those classic, tremulous Aaron Neville falsettos - it may be impossible to capture on the printed page, but you've heard it before. You heard it on his classic 1966 ballad, "Tell It Like It Is," on his acclaimed records with his brothers in New Orleans first family of rock n'funk, The Neville Brothers, on his Grammy-winning hit duets with Linda Ronstadt and Trisha Yearwood; and on his A&M Records solo albums WARM YOUR HEART, THE GRAND TOUR, and AARON NEVILLE'S SOULFUL CHRISTMAS. And now you'll hear it once more on THE TATTOOED HEART, the latest chapter in one of the hardest-fought, most triumphant success stories in popular music.

Aaron might well be singing about that bond in "Everyday Of My Life," a gorgeous, doo-wop influenced ballad on THE TATTOOED HEART. "I want to have and to hold you, inspire and console you," he sings with his usual delicacy, and it sounds as if he's aiming the words partly at a woman, partly at his audience.

I wanted to make a record that would be real soulful, with a little more of an R&Bedge," says Steve Lindsey, who has now produced three of Aaron's albums as well as working with the likes of Peter Gabriel and Leonard Cohen. "Not a modern R&B edge - more on the level of early Aretha or Wilson Pickett." As for Aaron, his mission is, as always, simpler and purer: "I just wanted to make a good record," he says. "I don't want to just sing songs, you know? I want to sing thinks that people can feel, and to let them know that I feel it too."

If THE TATTOOED HEART is full of music that Aaron feels deeply, it's because this is the kind of music he's been listening to since he was a child growing up in the Calliope housing project in New Orleans. Living in that city was its own musical education, of course: Keeping its own lazy pace in a bend of the Mississippi River, the Big Easy has long absorbed the music of the American South, of the Caribbean, and of Africa; everything eventually makes its way down the river or across the sea to New Orleans, where jazz, blues, country, reggae and many other styles are simmered into a gumbo of astonishing riches. But music was also inescapable inside the Neville home: Aaron's mother and uncle were once a song and dance team, his uncle George Landry ("Uncle Jolly") led a band of Mardi Gras Indians, his father collected Nat "King" Cole records. And Aaron, who was born on January 24, 1941 as the third of the four Neville Brothers, also had the influence of older siblings Art and Charles.

He loved it all, which is why he still sings it all. Take the three country songs on THE TATTOOED HEART, songs recorded in Nashville and co-produced by Keith Stegall. An anomaly? Not at all. There's a reason. Aaron was embraced by Nashville when he made George Jones' "The Grand Tour" the title song to his second A&M album. "I grew up going to the movies watching Roy Rogers and Gene Autry," admits Aaron. I was a big Hank Williams fan, and later on I loved Patsy Cline. I was a cowboy. I used to yodel and everything."

There are no outright yodels on the new album, though. Instead Aaron (assisted by Kelly Willis) applies the lightest of touches to the gentle wisdom of Kris Kristofferson's "For the Good Times," a favorite of Aaron's since he heard Ray Price's original version. The Nashville tracks also include "Why Should I Fall in Love," which he calls "an old Freddy Fender-type song," and "In Your Eyes", a tune Aaron wrote close to fifteen years ago and then recently revised with Pamela Hayes. "I messed around with it a few times after I wrote it, but we put it back the way it was originally, he says. "A pure country song." For the most part, though, THE TATTOOED HEART is a soul album in the tradition of past greats. The songs run the gamut from the elegant ballad, "Some Days Are Made for Rain" to the driving Dixie-bred-funk-rock of "Down Into Muddy Water" (written by Dennis "Burning Love" Linde), from the classic Southern soul of "Beautiful Night" to the slinky grooves of "Try (A Little Harder)" and "My Precious Star"

("Beautiful Night", "Try (A Little Harder)" and "Show Some Emotion" all feature typically earthy guitar from the legendary Steve Cropper) Dianne Warren who wrote Aaron's 1993 hit "Don't Take Away my Heaven" returns with the first single, the lifting, reggae styled, "Can't Stop My Heart From Loving You (The Rain Song)."

There's also a tip of the hat to an old favorite of Aaron's, Bill Withers. In the early Seventies, when Bill Withers had his biggest hits, Aaron was at a low point in his career: He'd been making records since the early sixties, and had a couple of hits including "Over You" and of course, "Tell It Like It Is." But like virtually every other great New Orleans musician of the time, he wasn't the one making money off his success; instead he had to work on the docks, in the steel mills, wherever else he could get a job that paid the bills. But he still sang when he had the chance - and in the small clubs where he appeared, he would perform Withers' classic hits "Ain't No Sunshine" and "Use Me." For THE TATTOOED HEART, Aaron dug out the later song; drummer Ed Greene and bassist Freddie Washington locked into its sinuous rhythm, while Aaron's brothers Charles and Cyril added saxophone and backing vocals, respectively. And when they needed a copy of the lyrics, those words were hand delivered to the recording studio

by none other than Withers himself.

Naturally, the album also includes one spiritual song; this after all is a man who used prayers to St. Jude - the patron saint of lost causes - to get him through the years when it seemed as if his vocal gifts might not be enough to rescue him from the dead- end life of many of his friends. Faith sustained Aaron when his musical and personal fortunes were at their lowest, and it sustained him after he rejoined his three brothers on the infectious WILD TCHOUPITOULAS album in 1976. It would be thirteen more years, several acclaimed but unsuccessful albums as the Neville Brothers, and countless prayers before the breakthrough: first the Neville Brothers masterful 1989 album YELLOW MOON, then Aaron's four duets with longtime fan Linda Ronstadt on her double platinum CRY LIKE A RAINSTORM, HOWL LIKE THE WIND, then his first solo album on A&M records, WARM YOUR HEART.

Two albums, four Grammy Awards and a couple Rolling Stone magazine critics' poll victories later, Aaron remembers what it took to get him here - and so he ends each of his albums with some sort of hymn. This time its the pop-gospel standard "Crying in the Chapel." The best known version may have come from Elvis Presley, but when Aaron sings it, he's thinking back further. "I first heard it by Sonny Til and the Orioles back when I was about eleven years old," he says, "and that's when I fell in love with it . He was one of the great singers"

THE TATTOOED HEART you might say, is the work of another of the great singers. With every new album, Aaron Neville carries on the legacy of the greats who influenced him, and sings for the friends and relatives who didn't make it through the obstacles and the family that has stood behind him. The open, generous, heart, at the core of his music is indeed tattooed - tattooed with the names, emblems, and dreams of those who came before, those who didn't make it this far, those who needed his music in the past and will need it in the future.

"They've been with me almost all my life, since I was a teenager," he says of his visible tattoos, the ones that adorn his face his arms, his body. "And they'll be there forever." So will his music. 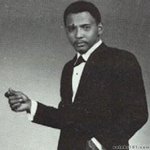