Aaron Brooks: Rockets Rookie
The Houston Rockets entered the 2007-08 NBA season with a bit of a log jam at the point guard position with Rafer Alston, Steve Francis, Mike James, and Aaron Brooks. However, when back-up PG Steve Francis suffered a season-ending injury and veteran Mike James fell out of favor with Coach Rick Adelman, Aaron Brooks zeroed in on his chance to shine. Fans with Houston Rockets tickets would see flashes of brilliance from the lightning-quick rookie, who played in 51 games throughout the season, averaging 5.2 points, 1.1 rebounds, and 1.7 assists in just about 12 minutes per game.

Aaron Brooks: 2008-09 Season
Fans with Houston Rockets tickets wouldn’t have to wait long for the explosive Aaron Brooks to return to the court. After less than a week, Aaron Brooks was ready to play, scoring 14 points, grabbing 3 rebounds, and dishing out 5 assists in just 20 minutes of play during the Houston Rockets’ win over instate and division rival Dallas Mavericks. Since Aaron Brooks’ return, Coach Adelman has called upon No. 0 to run the offense and provide a solid scoring option off of the bench. Early in the season, Aaron Brooks is shooting an amazing 47% from behind the arc, which is a significant upgrade over his rookie campaign and his NCAA career.

Aaron Brooks: Standout Games
While the 2008-09 NBA season is still young, there have been a number of key games for Aaron Brooks already. In the Houston Rockets’ road game against the Portland Trail Blazers on November 6, 2008, Aaron Brooks returned to his former stomping grounds, receiving a warm reception from fans in Oregon. That night, Aaron Brooks scored 14 points in this homecoming game. 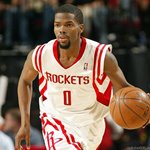