The wait is finally over and the world is about to discover the soulful charm of the #1 singer and songwriter Aaradhna. Crowned the first lady of Dawn Raid, "I Love You" the debut album is a dream fulfilled for the alluring 21 year old singer from Wellington, and is a testament to all the great soul singers that have gone before her and an inspiration to the future of pacific soul and R n B.

"I grew up with a Samoan mother and an Indian father" says Aaradhna who gained rich musical influence from both cultures. "I also discovered my own inspirations from artists like the Temptations, Mary J. Blige, Sam Cooke, Lauren Hill and SWV"

Aaradhna first showed singer aspirations at the young age of 12 singing along with her mother to traditional Samoan and country songs. When her father was home she would try to imitate the songs she heard with her dad on Bollywood movies, even though she couldn't understand what they were saying. Aaradhna began writing her own songs at the age of 13; she entered her first talent quest the same year making it in to the finals. Soon after she joined the school choir at Porirua College and then deciding to take her dream further, she went on to form a five piece girl group called "Lovera".

Fate works in mysterious ways and Aaradhna got a lucky break when Brotha D, co founder of Dawn Raid Entertainment was on tour in Wellington. "I'm not quite sure who he knew in my family, but all I remember was my aunty calling me and saying Brotha D is getting his hair braided at my Nana's house, and that I needed to get over there" laughs Aaradhna as she remembers how nervous she was at the time. "I had to sing on the spot in front of Brotha D and my whole family". Brotha D liked what he heard and discussed with her family Aaradhna moving to Auckland to pursue her music career. With her dream in a bag Aaradhna made the move to Auckland and signed with Dawn Raid Entertainment in 2003.

Barely adjusted in her new surroundings Aaradhna received the opportunity of a lifetime when she was invited to record with #1 RnB artists Adeaze for their original "Getting Stronger". The collaboration was an instant success soaring to number 1 on the local charts and cementing Aaradhna's name all over New Zealand. "Getting Stronger" was certified Gold in July 2004 and went on to be the #2 most played song on radio for 2004.

After the success of "Getting Stronger", and the hype that followed, Aaradhna quietly surrounded herself in writing songs for her debut album. Two years in the making Aaradhna emerged with over 50 original songs to select her album from. "The first single 'Down Time' an up tempo love song, is about finding that special person in your life. 'Down Time' is that picturesque moment when all you want to do is relax with that special someone", muse’s Aaradhna

In today’s uncertain musical landscape Aaradhna’s unique songwriting has helped her craft an enchanting soul album that is both complex in emotion and tranquil in delivery. With production from platinum producer Brotha D, in house Dawn Raid producer Nate D and US producer Sol Messiah (TLC, Madonna, Jay Z, D12) stacked with 14 original songs written by Aaradhna, "I Love You" is set to be a landmark album for international soul music. 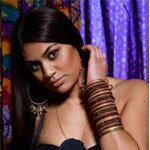