Childhood
Allah Rakha Rahman was born A.S.Dileep Kumar on the 6th of January in the year 1966, in Madras, to a musically affluent family. His father K.A.Sekhar was an arranger and conductor in Malayalam movies and had worked under the likes of Salil Chowdhary and Devarajan. Dileep started learning the piano at the tender age of four.

Background
At the age of 9, his father passed away following a mysterious illness with rumours abounding that he was the victim of black magic by his rivals. The pressure of supporting his family fell on Dileep. At he age of 11, he joined Illaiyaraja's troupe as a keyboard player. It was his mother Kareema Begum
who encouraged him to follow in his father's footsteps. But all this had an adverse affect on his education. Infrequent attendance and an unaccommodative management forced him to shift schools from the prestigious Padma Seshadri Bal Bhavan to the Madras Christian College and finally he dropped out of school altogether.

Religion
In 1988, one of his sisters fell seriously ill and numerous attempts to cure her failed. Her condition progressively worsened. The family had given up all hope when they came in contact with a Muslim Pir - Sheik Abdul Qadir Jeelani or Pir Qadri as he was popularly known. With his prayers and
blessings, Dileep's sister made a miraculous recovery. Rattled by the bad experience and influenced by the teachings of the Pir, the entire family converted to Islam. Thus A.S.Dileep Kumar became Allah Rakha Rahman.

Musical background
He also played on the orchestra of M.S.Vishwanathan and Ramesh Naidu and accompanied Zakir Hussain and Kunnakudi Vaidyanathan on world tours. All this experience enabled him to earn a scholarship to the famed Trinity College of Music at Oxford University from where he obtained a degree in Western Classical Music. After he returned he continued to be a part of various music troupes. He was also a part of local rock bands like Roots, Magic and Nemesis Avenue where he performed with his future colleagues like Ranjit Barot and Sivamani.

Career in Ads
Vizi Manuel, the lead keyboard player in Illaiyaraja's troupe, advised him to try other alternatives like advertising. Fortunately for Dileep he soon got his first break in advertising when he was asked to compose the jingle to promote Allwyn's new Trendy range of watches, in 1987. The ads were a success and Dileep's work in them was appreciated. Dileep moved full time into advertising as a few offers came his way. Thus began Dileep's 5-year saga in advertising where he went on to compose more than 300 jingles. Rahman did a lot of popular ads like those for Parry's, Leo Coffee, Boost featuring Sachin
Tendulkar and Kapil Dev, Titan, Premier Pressure Cooker, Hero Puch and Asian Paints. The jingles that he composed for the Leo Coffee ad starring Aravind Swamy and the Asian Paints ad directed by Rajeev Menon also won him awards and recognition. He also won an award for composing the theme music of the Madras Telugu Academy's Spirit of Unity Concerts.

Studio
In 1989, he started a small studio of his own, called Panchathan Record Inn, attached to his house. This would later develop into one of India's most well equipped and advanced recording studios. In his established state of the art sound and recording studio he began experimenting in sound engineering, design and production. He also began a collection of sound samples, creating one of the most comprehensive sonic libraries in Asia. Earlier

Non-film work
During his stint in advertising, he released his first album, of Muslim devotional songs, titled `Deen Isai Malai'. This was followed by `Set Me Free', an album of English songs which was the launch album of singer Malgudi Subha, by Magnasound, where Dileep set the songs to tune. Both the albums went unnoticed in the market.

Films
At an advertising awards function he chanced upon a young man receiving the award for the best ad jingle which he had composed for the popular Leo Coffee ad. At the party that followed the awards presentation ceremony Maniratnam was introduced to the young composer by his cousin Sharada Trilok
of Trish Productions for whose company the young man had worked. Mani requested for a sample of his wares. The composer readily complied and invited the director over to his studio where he played out a tune that he had been pushed into composing by his school friend G.Bharat alias Bala who had been greatly disturbed by the Cauvery river tensions. Mani was hooked instantly. He signed on the composer to score the music for his next film which was to be produced by the veteran Tamil director K.Balachander. That film was Roja. That tune would become the song "Tamizha Tamizha". Rahman became a household name in Tamil Nadu overnight and the score of `Roja' was the first step in changing the face of Indian film music. `Roja' won every conceivable award in music that year. Rahman
also got the Rajat Kamal for best music director at the National Film Awards , the first time ever by a debutante. He left ads and moved into film music full time.

In the five years since Roja, he has created music for blockbuster Indian films including Roja, Pudhiya Mugam, Gentleman, Kizhaku Seemaiyilae, Duet, Kadalan, Bombay, May, Madham, Indian, Muthu kadhal Dasam, Love Birds and others. His 1995 soundtrack for Bombay crossed 5 million units and Rahman
had arrived as the "King of Indian Pop" with sales of more than 40 million albums over a period of 3 years.

Playback singing
In the movie "Bombay" Rahman formally took to playback singing. Rahman had lent his voice to his compositions earlier too but they had been part of the chorus or bit pieces like `Marhaba' in `Urvashi' in `Kadhalan' or background pieces and interludes like `Yelelo' in `Chinna Chinna Aasai' in `Roja'. But
`Hamma Hamma' in `Bombay' was Rahman's first complete song.

Vande Mataram
In 1996, when Rahman had gone to Bombay to attend the Screen Awards ceremony, he met his childhood friend G.Bharat. During this meeting both had discussed a proposal for an album to commemorate 50 years of Indian Independence in 1997. In 1997, the International music giant, Sony Music, whose portfolio included the likes of Michael Jackson, entered the Indian market in a big way. They were looking to promote Indian artistes internationally. And the first person to be signed up by Sony Music from the Indian sub-continent was A.R.Rahman, on a 3-album contract. Rahman suggested the idea that he had discussed with Bharat to Sony Music India and was immediately accepted. Called
`Vandemataram', it was a tribute to the motherland and featured songs to mark the 3 colours of the Indian Flag. `Vandemataram' was released simultaneously in 28 countries across the world under the prestigious Columbia Label of Sony Music on August 15th 1997. Rahman himself performed live at Vijay Chowk in New Delhi on the eve of the Golden Jubilee of Indian Independence to a packed audience that
comprised of the Prime Minister of India. The album was a mega success and sold over 1.2 million copies in India and did reasonably well internationally too.

Artistes & inspirations
At the age of 32, Rahman has already worked with internationally reputed artistes like Nusrat Fateh Ali Khan, Apache Indian, Zakir Hussain, Kunnakudi Vaidyanathan, Dominic Miller, L.Shankar, Kadri Gopalnath, Vikku Vinayakram, Ustad Sultan Khan and Pandit Vishwa Mohan Bhatt among many others. Rahman
has in collaborations with artists such as L. Shankar, Zakir Hussain, David Byrne, Talvin Singh and Apache Indian - both recording and on tour. On a recent trip to India, David Byrne met Rahman and was so impressed that he went on to record some sessions with Rahman for a project he is currently completing (as yet unreleased). Rahman lists among his favourites Bach, Mozart, Beethoven,
Carpenters, Carnatic, Rock and fusion.

He credits all his inspiration and success to Allah.t 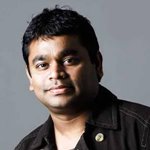