"I think some people may be surprised," says Alison Sudol. "They think that I'm all fragile and ethereal—and that's lovely, it's flattering. It's all I've really let anyone see, up to this point. But I have a wild side too. I like to bang on things and cause a ruckus every now and then. I'm a quiet person with a loud streak. I like both. This record is a testament to that."

Sudol, age 24, is the leader of A Fine Frenzy, which she introduced to the world with the 2007 album ONE CELL IN THE SEA. The project established her as one of the most talented young singers and songwriters around; it received rave reviews, was widely exposed through songs being licensed to numerous television shows, and reached Number One on Billboard's "Heatseeker" charts. A Fine Frenzy was chosen as a VH1 "You Oughta Know" artist, and much was made of the young redheaded singer's literary interests (including a band name taken from Shakespeare's Midsummer Night's Dream).

But with the follow-up, BOMB IN A BIRDCAGE, Alison Sudol is most certainly revealing another side of A Fine Frenzy. While the album retains the tuneful charm and whimsical language of the debut, it adds new colors and textures, with louder guitars and beats that sometimes veer into New Wave-y dance territory.

Sudol attributes some of her attraction to different sounds to the whirlwind path that her career had taken, including lengthy tours alongside the likes of Rufus Wainwright and Brandi Carlile. "I came home and didn't know how to be. My life had really changed," she says. "I was tired and burned-out, and sick of being on the road, but I also had learned a lot from the musicians we had toured with and wanted to put it to use. I needed music to ground me, to figure life out and to make myself happy."

Playing live and exploring new music led Sudol to the conclusion that the ethereal, haunting feel of ONE CELL wasn't the only weapon in her arsenal. "On the first record, I felt very young, and I think I made up for it by being very serious... about everything... This time, I didn't want to limit myself. I wanted to stretch and grow and push myself past my comfort zone. I also wanted to have fun."

"On tour, I discovered that, while I love being behind the piano and having quiet moments with the audience, I also love rocking out and having a good time. I started expanding my tastes, listening to as much music as I could get my hands on. Johnny Cash, Bob Dylan and the Talking Heads changed my life."

Instead of the usual sophomore slump, Sudol found that ideas were coming to her easily. She wrote more than an album's worth of material over a few months before returning to the studio, once again with producer Lukas Burton (who co-produced ONE CELL). The cheery "What I Wouldn't Do"—complete with actual claps and whistles—was the first song she and Lukas attempted. "I was actually sick when I did that vocal, but it was so much fun," says Sudol. "I thought that as long as I could continue with that attitude and remain that natural, then we would be fine."

The next few songs A Fine Frenzy recorded—"Happier," "Swan Song", "Beacon"—continued to map out a gentle, lyrical style. "I thought ‘OK, so this is gonna be a sweet, mellow, quiet album,'" says Sudol. "But then I wrote ‘Stood Up' and had to rethink things a bit."

A sweeping rock ballad, complete with bombastic drums-and-vocal break, the song became the pivot point for BOMB IN A BIRDCAGE. "It was the most unruly I'd ever been," says Sudol. "When I wrote it, I knew it had to be enormous- giant guitars, raucous drums. I was scared by it at first and wanted to put it aside. But the songs I tend to love the most in the end are often the ones that, initially, I wanted to do away with. They're overwhelming when they first come along. Change scares me—but I know that about myself. Usually when I'm scared, it's an indication that I ought to plow ahead. It's not particularly easy and I would love if it weren't the case, but it tends to work."

Though the album reaches into such unexpected sonic styles as the bouncy dance-pop of "Electric Twist" and the breezy, propulsive "Blow Away," Sudol's lyrics remain rooted in the natural world. Born in Seatlle and raised in Los Angeles, it's clear that no matter how much of her life is spent on stages and in studios, she retains a close relationship to the outdoors, and to the spirit of fantasy she found in writers like Lewis Carroll and C.S. Lewis.

"That's who I am, that's the way I see the world," she says. "It's broadened, but it hasn't changed. On tour, some of the most amazing moments came in seeing the world: parks, mountains, rivers, oceans. That reminds me of who I am as a human being, and whatever I do, I'll find a way to work with those elements."

On the other hand, Sudol is far from being some kind of romantic Luddite. In fact, she was active on Twitter long before it became a cultural phenomenon—to the point that she now has over half a million followers, making her one of the top ten artists on the service, alongside folks like Britney Spears and John Mayer.

With ONE CELL, Alison Sudol and A Fine Frenzy were often presented as one and the same. But Sudol maintains that has never been the case, and on BOMB IN A BIRDCAGE, there is clearly more of a band dynamic at work. "I've always thought of A Fine Frenzy as more than just myself," she says. "I'm the spokesperson, I write the songs and sing them, but I get so much from my collaborators. This wouldn't be the same album with anyone else."

The cliché is that second albums are always the hardest—that an artist puts her whole life into her debut, and then has to crank out a follow-up while touring and feeling commercial pressure for the first time. But rather than taking the path of least resistance on BOMB IN A BIRDCAGE, Alison Sudol has done exactly what we hope musicians will do: She has challenged herself, and reached heights that even she couldn't imagine.

"I felt like being daring," she says. "I wasn't interested in doing more of the same. That doesn't inspire me, so I just went with whatever was exciting me. And now, I can't wait to get on the road with this stuff! It's going to be quite an undertaking, but I'm up for it." 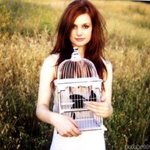