What do you get when you assemble three talented young singers from Las Vegas who effortlessly blend the rhymes and sounds of Gospel, Hip-Hop, Jazz and Blues? You get the group 702 whose debut gold album, No Doubt, has rocked the music charts with a sound that can only be described as sleek, hot and funky, the trio, made up of Irish Grinstead, her sister Lemisha Grinstead and best friend Kameelah Williams, get the name of their group courtesy of their hometown's area code.

702's rise to the top is the stuff of which fairy tales are made. Just four years ago, Irish 17, Lemisha 19, and Kameelah, 19 were typical teenagers working part time after school at a family-owned restaurant; hanging out at the mall with their friends; going to the movies; dating boys; singing; and dreaming of life after high school. Singing has always been a way of life since they were all raised in very musical families. What made their singing ability remarkable, however, was that they sang with a vocal maturity far beyond their youthfulness.

Natives of Las Vegas, the Grinstead sisters made a habit of singing in the lobby of Caesar's Palace when heavyweight fights were in town, hoping a big-time celebrity would discover them. Sinbad happened by one day and the next thing they knew, he was at their parents' house. Sinbad suggested Sweeta than Suga (the group's former name) enter an annual music talent convention in Atlanta. Although the girls had missed the deadline, Sinbad used his clout to ensure their participation. The girls competed and came in second place.

Their really big break came while hanging out in the lobby of the hotel at the convention. Seeing singer, producer Michael Bivins, founder of Boyz II Men, in the lobby of the hotel, the girls worked up the courage to ask him if they could sing for him. Bivins, tired and looking beat from the day's activities, was reluctant to hear one more group. However, encouraged by throngs of onlookers, the girls begged and pleaded with Bivins for one chance. Finally he replied, "All right, girls. Let's see what you can do." After hearing the girls' beautiful impromptu accapella performance, Michael turned to the crowd and asked, "What do you think?" The crowd's response was immediate - they screamed, "Sign them girls, Mike, give them girls a chance!" With such an overwhelming response, how could he resist? Bivins later said, "When I heard them sing, I knew that I had found my Supremes!"

When Irish's twin sister, Orish, decided to drop out of the group, good friend Kameelah Williams dropped in. Under the guidance of Bivins, Irish, Lemisha and Kameelah later spent more than a year meeting producers and songwriters to create the right feel for their album. Weekends found them sequestered in marathon recording sessions in Los Angeles. Weekdays had the girls leaving their Las Vegas high school, flying to a Los Angeles recording studio, recording all night long while taking turns studying and returning to Las Vegas in time for their first class. Despite maintaining a dizzying schedule that might have made some music veterans shudder, giving up their friends, a good night's sleep and any semblance of a social life, including missing the prom, the girls remained committed to their music and their schooling. Misha and Meelah graduated in 1996, Irish has a tutor and they have a gold album that shot to number one on the Billboard "Heatseekers Chart."

The first single and gold selling record, "Steelo" (slang for style), written by and featuring fellow recording artist Missy "Misdemeanor" Elliott, combines pulsing, hip-hop beats with a bold, sexy melody that gets under your skin and won't let go. The second gold single, "Get It Together," is a soulful slow jam that expresses the heart-felt emotions of a woman at the crossroads of an impassioned relationship. "Get It Together" exploded by giving the group a #3 R&B single and a #10 Pop single on the Billboard charts. "All I Want" is a contagious dance cut that suggests some of the simple things that any woman wants in a relationship. "All I Want" was also selected as the debut single for the movie soundtrack for Good Burger. The Paramount and Nickelodeon movie features Nickelodeon personalities Kenan and Kel as well as cameos by basketball player Shaquille Oneal, comedian Sinbad, master of funk George Clinton and MTV's Carmen Electra.

1997 has been a wonderful year for 702. Their debut album went gold, and the young ladies were thrilled to win the 1997 Soul Train Lady of Soul Award for Best R&B/Soul album of the year. In addition, 702 kept busy opening for New Edition, Keith Sweat and BLACKstreet during the 1996 -1997 New Edition reunion tour; appearing on numerous national television shows; singing the theme song for Nickelodeon's new sitcom, "Skeeter;" performing on Missy Elliot's 1997 album; singing with Busta Rhyme's new artist Rampage and traveling the world. Though youngsters by music industry standards, these young women have already set the tone for a musical career that promises to generate even greater success, and that's no doubt!

The group is now broken up. Lameisha was diagnosed with breast cancer after feeling a lump in her left breast. Sister Irish, and family have been devasted, and with thoughts of keeping the group together, failed miserably. Kameelah, was financially distressed, and after her mother died from a car accident in 1999, it put her at all time low. What once had been 3 powerful motivating girls, ready to take on the world, like, the number one hit group the Spice Girls, didn't end up working out. The group though had won many emmy's in the past, and many songs have been recorded to success. Thoughts of one day going platinum, won't come for the group 702 anymore, and that's all it is now. Thoughts. 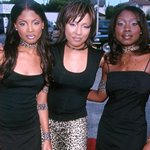