The young women that shape the R&B trio 3LW (Three Little Women) are Naturi Naughton, Kiely Williams, and Adrienne Bailon, and together they compose the healthy pop sound similar to the soulful poise of Destiny's Child, TLC, and Blaque. Each of them, however, hail from different backgrounds and their musical influences span a wide spectrum. The initial formation of the group was pulled together by Michelle Williams, mother of Kiely. She wanted a singing outlet for her daughter, and to make her daughter's wishes a reality, she held auditions and hand-picked each member for 3LW and became the manager of the group. 3LW was official.

New Jersey-native Kiely Williams started embracing the entertainment industry at age five. Her beginning moment in show business was for a TV pilot directed by Robert DeNiro, but the desire to sing came later. Naturi Naughton, also of New Jersey, had been singing in the church choir since the age of five, but Adrienne Bailon's rise to performing took interesting shape. Bailon, who is of Puerto Rican and Ecuadorian background, grew up listening to her singer/songwriter father who emigrated from Ecuador to the States in hopes of scoring a better career deal in professional singing. Enjoying Latin tinges of salsa and Cumbia, she grew up listening to music and relishes the pioneering careers of Celia Cruz and La Lupe, but also appreciates the Latin newcomers like Marc Anthony and La India. Prior to joining 3LW, Bailon was spotted by Ricky Martin while singing with her church choir at a conference at Madison Square Garden. Hand-picked by the Latin superstar himself, Bailon had the opportunity to sing backup for Martin's performance that same evening.

In fall 2000, the girls also got a chance to act, playing an all-female group called Blue Mascara in an episode of the Nickelodeon series Taina and they also contributed their track "Til I Say So" to the 2000 teen flick Bring It On, featuring Kirsten Dunst. Signed to Epic, 3LW were becoming TRL mainstays at the time of their self-titled debut in fall 2000. Two years later, the ladies of 3LW added vocals to Bone Thugs-N-Harmony's summer smash "Get Up and Get It." They also spent most of summer 2002 recording and tweaking a second album, A Girl Can Mack. Unfortunately in August, founding member Naturi Naughton announced that she had been forced out of 3LW just a month shy of A Girl Can Mack's release date -- leaving the current status of the group in question. Before the year's end, the ladies held various auditions in Atlanta, Los Angeles and New York in search of a third member. (They also released a Christmas album, Naughty or Nice, as a duo.) Jessica Benson made the cut and joined 3LW in December, bringing the vocal group back to three little women. They returned in 2006 with Point of No Return, an album featuring production work from Jermaine Dupri, Dre & Vidal, and Rich Harrison. MacKenzie Wilson, All Music Guide 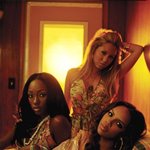